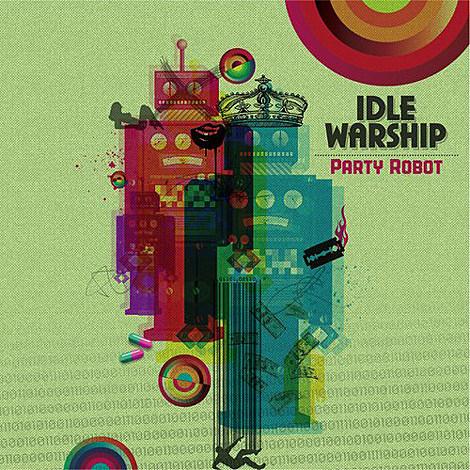 Talib Kweli and his Blacksmith Music imprint are scheduled to celebrate the holidays the right way, with two turntables and a microphone! "The Night Before The Night Before Christmas" at Highline Ballroom on 12/23 will feature Jean Grae, Strong Arm Steady, and Soul Brother #1 Pete Rock. Tickets are on sale.

It's one of three shows that Kweli has lined up in the coming month, with the second being with his Idle Warship project at Southpaw on 11/28. Trezure The Empress, Jah C + The Antidote, and Niles get credited with the assist. Tickets are still available. Idle Warship recently dropped a new mixtape blessed by the great Mick Boogie. Download a copy of the mixtape, Party Robot, above in one of two mixtape covers. The first is above, the second is available at MySpace.

The third for Talib is the previously-mentioned show at Brooklyn Bowl on November 22nd. Jean Grae is also on that one as well as Mickey Factz and Skyzoo. Tickets are still on sale.

On the same day as the Highline show (12/23), just across town, BB King's will host the Hip Hop Legends show with Method Man, EPMD, Doug E Fresh, Large Professor, Onyx, AG (of Show & AG) and many more. Helluva old school lineup! Tickets are on sale. Rakim probably should be on that lineup, but instead he'll headline a show of his own at BB King's on 11/19 along with Rhymefest. Tickets here.

More imminently, Cee-Lo is taking some time away from Gnarls Barkley to return to his great (and somewhat unsung) Southern hip hop crew Goodie Mob, who are scheduled to play their reunion show at BB Kings on FRIDAY 11/13 with The Ruler Slick Rick (who'll have a live backing band!). Tickets are still available, and I have a PAIR OF TICKETS FOR GIVEAWAY. Details on how to win below with some videos, including a live video of Idle Warship from SOB's, below...

To win Goodie Mob tix, email us at BVCONTESTS@HOTMAIL.COM with a Subject line of "Who's That Peekin In My Window?" Include your first and last name. One winner will be picked at random and notified. Good Luck!