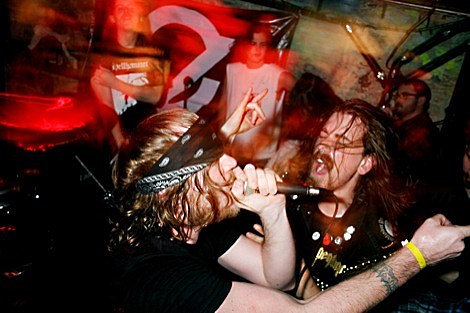 If you've ever raised a can of suds to the sound of blackened-thrash, then most likely the soundtrack was Skeletonwitch. The Ohio party animals are hitting the road in February, tagging the great Iron Age, Howl, Black Tusk, Doomriders, and even Ringworm for select dates in (continued) support of their thrash-terpiece, Breathing The Fire.

While the 'witch isn't scheduled to crash land in NYC, Iron Age IS, having nailed down a date at The Charleston on Feb 16. Here's to hoping it goes better than the last time they played The Charleston. All dates below.

Also a reminder: Mammoth Grinder, which features Alex from Iron Age (on occasion), will be at The Charleston on Jan 12th.

Meanwhile, Ringworm is preparing to reissue The Promise on wax via A389 and record their new album, Scars, this spring. The Cleveland band is one of many greats scheduled for a show in Baltimore in celebration of the sixth anniversary of A389 Records and the owner's (Dom from Pulling Teeth) birthday. The two day event (Jan 8th & 9th, 2010) will feature appearances from Canadian badasses Thor (backed by Pulling Teeth), Integrity, Gehenna, Pulling Teeth, Slumlords, No Redeeming Social Value, Deathammer (members of Oak), Seraphim, and many others. Holy Terror fans are officially stoked. Tickets are still available for both the first and second nights, in addition to a two day pass. Starkweather was originally scheduled to play the show, but were forced to drop out:

If you look at your hand and feel the tender center of your palm...well a few days ago, the drummer tore that at his day job. We waited a few days to find out what's going on before making an official announcement, and unfortunately it's going to put him out of commission for a while. [Vocalist] Rennie said his hand looked like a catcher's mitt. So regrettably to their disappointment, mine, and yours they had to bail out of the show.

Gray Ghost has been added as Starkweather's not-to-shabby replacement. The band released their Deep In The Shallow End on Chainsaw Safety Records and are offering a taste of said release for download above.

Integrity and Seraphim have a combo pack due this week on A389 which includes the To Die For 10" (first time on wax), as well as a Seraphim 7". The pre-order is currently sold out. Though To Die For isn't available, you can download virtually all of Integrity's other releases for FREE, including Those Who Fear Tomorrow available above.