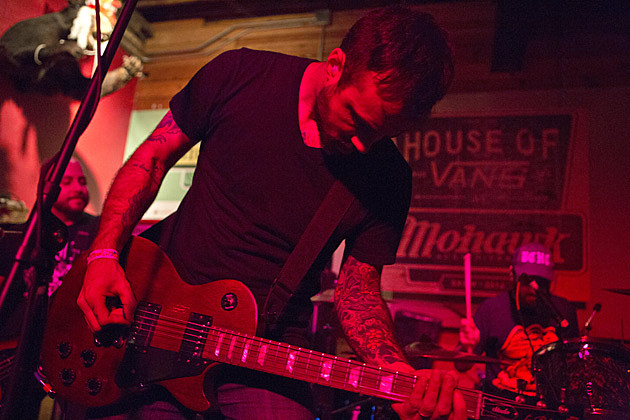 It's the holiday season, and what better way to give back than talking about a shit ton of metal. Our metal sister site Invisible Oranges is deep into top 10 season, with a number of individual writer lists posted (including one by yours truly) and still more to come. And for those of you in NYC, there's always a ton of metal tours passing through and other heavy shows happening here. We don't get to post about every single one, so here's a roundup of some cool stuff on the horizon that we've missed:

Abigail Williams, who released the great black metal album The Accuser this year, are touring with a band that they probably would've fit better with in their earlier days, classically-tinged tech-death band Fleshgod Apocalypse. The tour hits NYC at Gramercy Theatre on February 12, and also includes Carach Angren. Tickets are on sale, and all dates are listed below.

Fellow practitioners of technical death metal Rivers of Nihil are heading out on a tour of their own, with support from Black Fast and Dark Sermon. That tour will hit NYC for a show at Saint Vitus on February 19, and tickets are on sale now. Dates below.

Norwegian black metal band Taake is going on a loaded tour with crusty hardcore band Young and In the Way and USBMers Vattnet Viskar. That tour will stop in NYC for a show at Saint Vitus on March 5 with local support from Trenchgrinder. Tickets are on sale now. Dates below.

We already mentioned the Coffins show on February 15 at Saint Vitus, but since our last mention the great death/thrash band Noisem have been added as openers for that show, as were Ilsa. Tickets are still available. Noisem were also just announced for Decibel's Philly fest with Dying Fetus, Horrendous, and more.

Local rippers Meek is Murder have a show coming up at Saint Vitus February 4 with Moon Tooth, The Netherlands and Godmaker (tickets). And it's not exactly metal, but local noise/jazz/generally loud weirdos Zevious also play Saint Vitus on January 10 with Red Reiter and Needle Driver (tickets).

The Acheron is hosting a couple cool hardcore shows, including a show TONIGHT (12/18) with locals La Misma, No Time, S.L.I.P., The Brass and No Parole (tickets). Then Detroit hardcore band Freedom will stop by for a show on January 6 with Forced Order, NYC Headhunters, Manipulate and Impact (tickets).

Now on to the reminders. Baroness just started streaming their excellent new Purple LP, and they've got two NYC shows coming up on Sunday (12/20). They're playing an afternoon show at Rough Trade which you have to buy Purple at the Williamsburg Rough Trade store to get in to, and that evening they have a sold-out show at Saint Vitus with Earthling.

These are far from the only cool shows coming up at Saint Vitus. The Brooklyn venue also hosts two sold-out shows on January 8-9 by Russian Circles, Wildhoney, and Cloakroom. The "Aural Hellfire" tour of 1349, Tombs and Full of Hell stops by on January 11 (tickets). And then Bell Witch and Wrekmeister Harmonies will bring their slow, sad, scary live experience to Saint Vitus on February 23 (tickets).

Clutch are about to embark on their quick holiday tour with Valkyrie and Crobot that includes a NYC stop at Terminal 5 on December 29 (tickets). Tech-death crew Nile are coming through for a show at Gramercy Theatre on January 14 with Day of Doom (tickets).

Like your metal more from classics from the early '90s (or a little earlier)? Don't forget about that amazing Melvins, Napalm Death and Melt Banana tour; or the Abbath, High On Fire, Skeletonwitch and Tribulation tour; or the Cannibal Corpse, Obituary, Cryptopsy and Abysmal Dawn tour.

Prefer your metal even more classic? You're covered. Iron Maiden, Megadeth, Black Sabbath (not to mention Mac Sabbath), Slayer (with Testament and Carcass), AC/DC, Venom, Inc., and Anthrax* all have NYC dates coming up. What a time.

* - That Anthrax tour is with Lamb of God headlining, and most excitingly with Deafheaven and Power Trip opening. You can still get tickets for NYC.

Finally, and totally arbitrarily in its finality, there's that cool Voivod/Vektor/Eight Bells tour coming to Gramercy Theatre on February 7 (tickets), and on the lighter side there's the Sun Kil Moon & Jesu show at MHOW on February 26 (tickets).

Don't forget to check out those top 10 lists on IO. What else?

*=Rivers of Nihil, Dark Sermon only