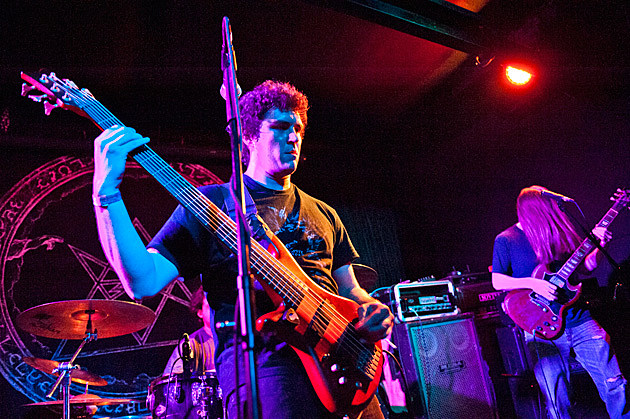 As mentioned, Secret Chiefs 3 are going on a North American tour this year which brings them to NYC for shows on May 17 at Mercury Lounge (tickets) and May 18 and 19 at Union Pool (tickets). After those shows, they'll do a residency at The Stone, playing two sets (8 and 10 PM) every night from May 28 to June 2.

Other residencies are happening at The Stone in June as well, including Sylvie Courvoisier from June 4-9 and Ned Rothenberg from June 18 to 23, both of which include shows with Ikue Mori (and Ned's also includes a show with Marc Ribot). After that, Zeena Parkins, who appears during Ned's residency, will hold her own residency from June 25-30. On the first night of that residency, Zeena plays a duo set at 8 PM with guitar great Mick Barr (of Krallice).

Mick Barr has other shows coming up too, including April 20 at 92YTribeca with Little Women (tickets); May 2 at Knockdown Center (52-19 Flushing Ave) for the previously discussed Red Bull Music Academy-presented Queens Drone Activity Progress festival with Pharmakon, Stephen O'Malley, Oren Ambarchi, Prurient, Hunter Hunt-Hendrix, Pete Swanson, Noveller, Kid Millions/Jim Sauter, Vatican Shadow and others (tickets); and May 22 at Silent Barn as a trio with Johnny Deblase and Larry Kwartowitz. The rest of the bill includes Brown Wing Overdrive, DeTrop and Pet Bottle Ningen. Admission for that one is $8 at the door.

Updated Secret Chiefs 3 dates are listed, along with a Mick Barr song stream, below...