Rakim at Rock the Bells 2010 (more by Eric Townsend) 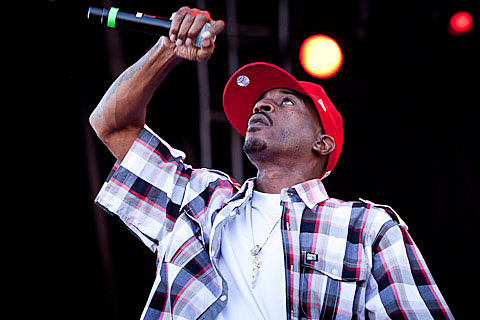 It's the new year, and like every year, there's a ton of great hip hop shows coming up in NYC, especially a lot this month (and of course a few announced for the months after that). So while you're trying to stay warm during the coldest winter, here's some of those shows you might want to check out:

As discussed, Jay Z brings his Magna Carter World Tour to his stomping grounds of Barclays Center on Sunday (1/12) and Monday (1/13). If you can't make the Brooklyn dates, or just still need more Hov in your life, there's other nearby dates happening at Mohegan Sun (1/17), Nassau Coliseum (1/19), and Prudential Center (1/22). Tickets for those shows are still available.

A bunch of golden-age rappers are joining forces for the Masters of Ceremony show at Radio City Music Hall on January 24 with DMX, EPMD, Rakim, Naughty by Nature, Brand Nubian, Big Daddy Kane, Slick Rick, Biz Markie, and Black Sheep. Tickets for that show are on sale now.

Another long-running NYC rapper, Talib Kweli will play the second annual Martin Luther King Jr. Day celebration at SOB's on January 19, and this one also honors the late Nelson Mandela. Tickets for that show are on sale now.

Also at SOB's on January 27, producer 9th Wonder will celebrate the release of his label Jamla Records' Jamla is the Squad compilation album. Statik Selektah hosts for the night, and the show will also feature ADD-2, Rapsody and the entire Jamla team -- Actual Proof, HaLo, GQ, Heather V and more -- with special guests. Not sure whose those guests will be, but the album features appearances from Jadakiss, Styles P, Talib Kweli, Elzhi, Phonte, and more. Stream a 9th Wonder-produced Rapsody track from the compilation, below. Tickets are on sale now.

And Ty Dolla $ign, who got some internet love for his 2013 mixtape, Beach House 2 (stream below), will play SOB's on January 22 with Black Cobain, Tijon and Gliffics. Tickets are on sale.

Dom Kennedy, who's notably collaborated with Curren$y, Schoolboy Q, Casey Veggies and others, plays NYC on January 28 at Irving Plaza with Skeme. Tickets for that show are on sale now.

Another Dom Kennedy collaborator, Nipsey Hussle, plays NYC on January 24 at Highline Ballroom with Erk the Jerk and The Kid Daytona. Tickets for that show are on sale now. Nipsey recently released a new track, "6in Heels," which you can stream below.

Waka Flocka Flame plays NYC on January 27 at BB King's. Tickets for that show are on sale now.

As discussed, J. Cole brings his tour to NYC this month on January 28 at the Theatre at MSG. Tickets are still available.

And 2 Chainz, Pusha T and August Alsina bring their tour to NYC soon after on February 5 at Roseland Ballroom. Tickets for that show are still available.

Other upcoming hip hop shows happening a bit later in the year include Cam'ron at Stage 48 on 2/20 (tickets), Shaggy at Brooklyn Bowl on 2/25 (tickets), and Slaughterhouse at Best Buy Theater on 4/26 (tickets).

These are just a few of the upcoming hip hop shows in NYC. What else?