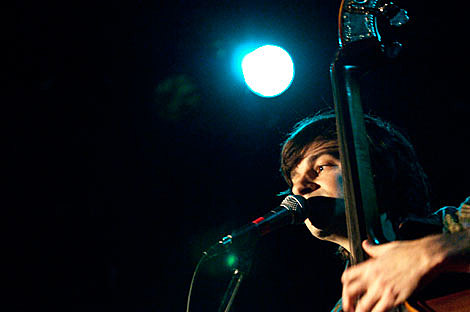 Nat Baldwin has been busy playing bass with Dirty Projectors, but he's also been working on his own material. To hear some of those double-bass-and-voice songs, check out Nat's set at Issue Project Room on May 22nd, which is streaming and downloadable at Freemusicarchive.org (there are also a bunch of cool instrumental interludes in that set).

He plays Issue Project Room on November 11th, along with Jen Shyu, Sabrina Lastman and Chris Mann, as part of the venue's three-night Vital Vox Festival. Tickets are on sale.

Before then, Nat Baldwin plays Zebulon twice, on October 13th with Diane Cluck and Spencer Kingman, and on October 27th with Buke & Gass and Delicate Steve.

Video of Nat covering Arthur Russell's "A Little Lost" at Silent Barn in August is below...