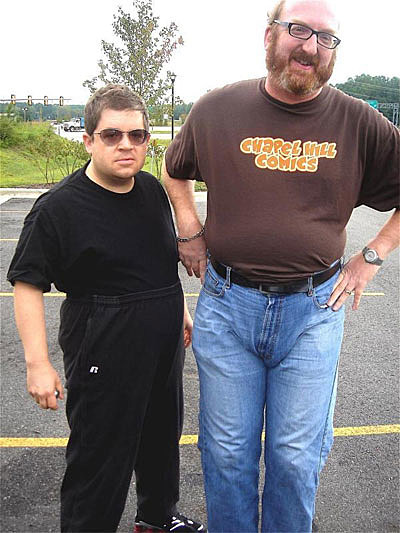 On Friday May 9, 2008 the NYC UCB Theater has an incredible night of comedy lined up, but two shows in particular are absolutely worth seeing.

At 8:00pm comedian Mike Birbiglia is doing 60 Minutes of New Comedy. Mike is huge. He just finished taping a pilot for CBS, he just put out a DVD and he has quite a few shows happening in May and June. To see 60 minutes of NEW comedy for a mere $8 is a ridiculous bargain. If Birbigs' 5/9 show sells out, you can wait in stand-by OR catch one of his other 60-minute performances on 5/15 and 5/23.

Then at midnight The Doug Benson Interruption is going to take over the UCB Theater. This particular installment will feature PATTON OSWALT, Esther Ku,Team Submarine, Anthony Jeselnik, and Rob Cantrell. For those who don't know, The Doug Benson Interruption is a show hosted by the EXTREMELY funny and EXTREMELY doobified comedian Doug Benson. He invites his fancy pants comedy friends to do stand-up while he sits in the crowd interrupting them with whatever might pop into his head. The last Interruption I went to didn't end until something like 2 in the morning. It's one of the loosest, funniest comedy shows around.

Advanced reservations for this particular edition of the Interupption are now sold out, but there will be a stand-by line. People often make reservations and just don't show up. If you show up instead, you might be able to get inside.

Patton also has some other upcoming shows scheduled including a bunch at Caroline's...

Watch a young Patton do stand up, HERE.