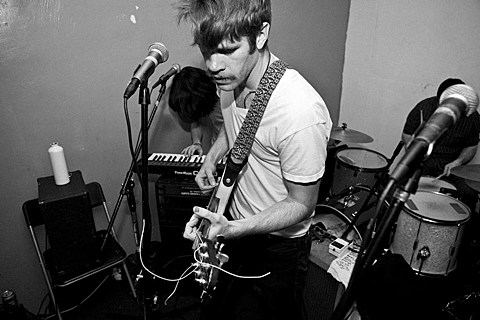 Brooklyn's Porches. have been a staple on the local live scene since forming in 2011, and if you tend to go to shows at places like Shea Stadium, Big Snow, Death by Audio, Silent Barn, etc, there's a good chance you've probably seen them. They're one of the newest signees to Exploding In Sound Records (home to Two Inch Astronaut, Fat History Month, Pile, etc, formerly home to Speedy Ortiz), and they'll release their official debut album, Slow Dance in the Cosmos, on the label on August 27. It follows a number of EPs and other releases that they've put out in the two years since forming.

Porches. make the kind of music that you might call "slacker rock" because of singer Aaron Maine's lazy drawl and the seemingly carefree attitude of the music, but with a live show schedule and prolific output like Porches have, they're anything but slackers. You get the feeling there's a sly wit underlying these songs too. The album's just-released single, "Headsgiving," opens with a riff that you almost think is going to be "Pretty Woman," and later on you hear the Beatles-referencing line, "She was just 17, you don't know what I mean," but those bits of rock n' roll history are almost unnervingly familiar in the context of the song. You can stream "Headsgiving," along with another album cut, "Franklin the Flirt," below.

Porches. have two upcoming shows at the moment, including one on August 16 at Big Snow Shea Stadium with Chicago's My Dad (who are a staple in their own hometown scene), Sirs, The Para-medics and Cameron Wisch; and an album release show at Shea Stadium on September 6.