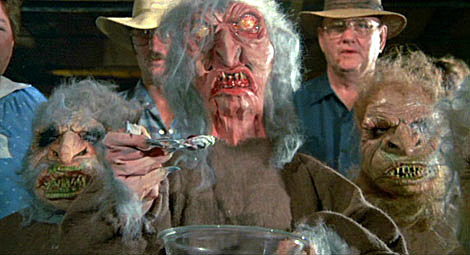 Kurt Vile will be playing a Rooftop Films event on July 31st. There he'll ditch his backing band the Violators for a performance before a screening of the documentary on the film Troll 2, "the legendary worst movie ever made, according to IMDB ratings."

That flick is such an event, Rooftop Films decided to stretch it over two nights. On July 30th they will show the actual film, accompanied by a performance from The Drums (one of many upcoming shows from that band, who also played last night at the Bell House). Other bands with Rooftop Films shows scheduled include Stars Like Fleas and Teengirl Fantasy. Full schedule below.

Vile (with the Violators on hand) just played the first of several upcoming shows with Blues Control (who announced more fall dates, below) at Bruar Falls on July 17th. Blues Control's distorted wall of sound worked well through the club's cozy sound system, but the arsenal of the Violators maybe pushed the backline a little too far. Lyrics and flourishes that came through crystal clear at Broadway Backyard (where he played one of my favorite sets of the day) roared out as energetic albeit indeterminate gestures. Not quite as engaging, considering many of the songs still aren't out in recorded form.

Vile's Matador debut, Childish Prodigy, is still on the way. Check out mellow jam "Overnite Religion" off that, above. The full Rooftop Films schedule, with all Kurt Vile and Blues Control tour dates, and the Troll 2 trailer, below...