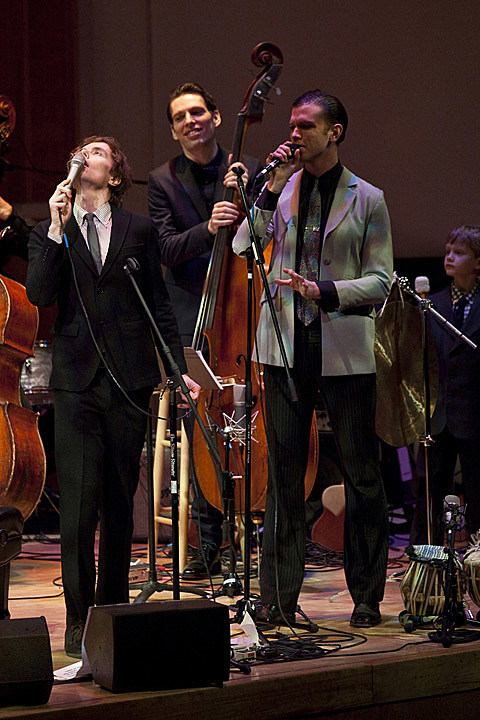 Late last year, Sam Mickens announced a split 7" with Voice on Tape due out "winter 2011/2012." That 7" still hasn't been released but you can stream Sam's contribution HERE. However, he did release a single last week, "One Final Round"/"To Victory or Death," which you can stream and purchase at his bandcamp. The songs have a traditional ballroom pop feel led by organic pianos and horns, until halfway through "To Victory or Death," when the band kicks it up into a double time punk beat.

Sam Mickens, who performed Saturday night as part of the Ecstatic Music Festival, has a few more upcoming NYC shows this month. He'll premiere his "Micropatronage" piece with a string quartet at Roulette on February 16 with Jim Staley and Zeena Parkins and Loren Mazzance Connors (whose new album, A Fire, was scheduled to come out this week but has since been delayed). Tickets are on sale now. Sam will then play the same venue on Feburary 18 when he hosts a live taping of ESP TV, which is also part of Roulette's Experimental Love Festival along with C. Spencer Yeh, Little Women, Grasshopper, MV Carbon, and Amanda Long. The event was curated by Scott Kiernan and Victoria Keddie. Tickets are on sale now.

White Ring last played in NYC last month at Glasslands (1/21) opening for oOoOO (who just announced an EP). How was that show?

Speaking of oOoOO's EP, Our Living is Killing Us (due April 10 via Tri Angle), Stereogum recently premiered the first track, "NoWayBack," which features vocals from collaborator Butterclock. Her airy vocals and oOoOO's beatwork bring to mind some of Grimes' downtempo material and its easily oOoOO's best track yet. Grab an MP3 of the song above and stream it below.