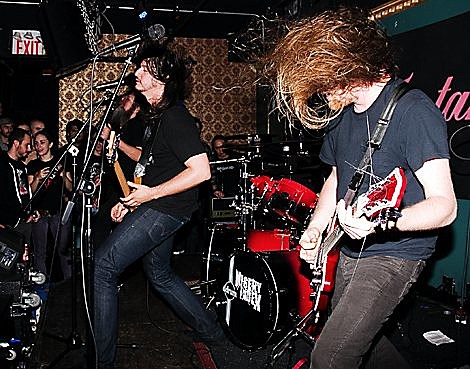 In lieu of my forthcoming Short Wave Warfare column (formerly known as This Week in Metal), I figured I would present a short blast of interesting shows coming up - for the dark side in you.

The biggest news of the pack is that Death metal greats Deceased will team up with the defenders of the filth, Superchrist, for the Slaves To The Grave tour which includes Union Pool on April 17th. Deceased is scheduled to make an appearance at MDF this year, while Superchrist is recovering from the release of Defenders of The Filth last year.

All Deceased tour dates and many more upcoming shows, continued below...

In addition to the previously discussed Magrudergrind matinee at Cake Shop on 1/23, the band has scheduled a show with BBG CMJ showcase alumni Misery Index and Mutant Supremacy at Union Pool on 2/20. Advance tickets are available.

Misery Index are currently grinding away at their new LP Heirs To Thievery due on Relapse later this year and is documenting the process at Hardtimes.ca. Magrudergrind released one of my favorite albums on 2009, their self-titled release on Willowtip. Full Misery Index dates are below.

Also playing on Jan 17th but posing a bit less of a problem due to it's 2PM start time, Naam, who will team up with Ben Davis (Sleepytime Trio, Milemarker) for a FREE show at Generation Records. It's one of two shows on the calendar for the BK stoners, with the other falling on Jan 30th supporting Earl Greyhound at Brooklyn Bowl. Get yer tix. Ben Davis will also be at Cake Shop later that night (1/17) and Pete's Candy Store the previous day (1/16).

Though Mammoth Grinder will be in town (again) on 1/12, another recent favorite of mine, The Body, will hit Lulu's (113 Franklin St Greenpoint) that same night with Bad Dream, Concussion, and Natur. The Body know a thing or two about 10,000 watt doom thunder, but are quirky enough to keep it very interesting. They rule.

In case you haven't heard already, Behemoth at Gramercy has been cancelled. The trek, which is now Shining-less but includes faves Lightning Swords of Death, will play The Crazy Donkey on 1/31 instead (tix) with Suffocation and Goatwhore and few not-so-savory others.