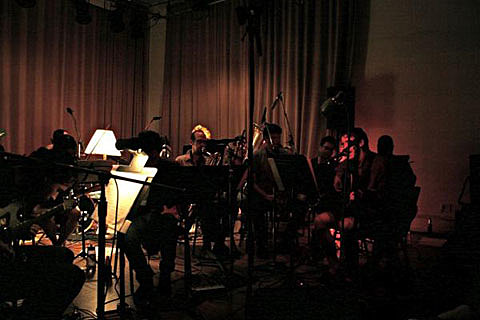 Hilarious. From the Grooms blog:
"One Hundred Things to Try and Sound Like besides Animal Collective's Last Three Albums

1. Their first 5 albums.
2. If Charles Mingus were in the Beatles pre-Revolver.
....
19. Skeleton$.
20. How Joan of Arc felt.
21. Nudity.
22. The Cocker Spaniels.
23. The Geddy Address.
24. Mountains of hate eroded into hills of ambivalence.
25. Hills of ambivalence eroded into plains of apathy.
26. Plains of apathy eroded into valleys of love.
27. Plastic Ono Band.
28. Plastic Ono Band.
29. Going on Nicorette at age eleven.
30. Running out of Nicorette at age eleven.
31. Meeting someone on the internet.
32. The soundtrack to John Mayer and Gary Busey's buddy-cop romp.

This is in no way saying anything nasty about AC and their tunes." [Grooms via Skeletons]

The rest of those 100 things are posted below.

Skeletons Big Band will be reforming for a two-night residency at Roulette on June 8th and 9th. Tickets are on sale. They'll be playing "brand new tunes and pieces and ideas and arrangements with a 13 piece ensemble of amazing players (who play in zillions of other amazing bands)." The full lineup for the band is below. Matt from Skeletons goes on to write: "Last year we did a similar residency, with 3 nights at Roulette followed by a night at Death By Audio. We've taken the recordings from those nights and made a record. You can hear the first track "NUMBERS" and watch a video we made for it..." That video is posted below. The Big Band record he mentions is different than People, their forthcoming follow-up to 2008's excellent Money.

On Thursday (6/10), Skeletons have another gig, this time at Death By Audio where they'll be playing as the big band and regular quintet. Also on the lineup are Grooms, Unstoppable Death Machines and Starring, for whom the show serves as the release party for Wife of God, their new LP on Death By Audio Records.

Skeletons videos and more are below...

Skeletons - Barack Obama Blues at Death By Audio in Williamsburg, Brooklyn, New York City on May 08, 2010.

The remaining of 'One Hundred Things'

3. If Charles Mingus were in the Beatles from Revolver on.
4. "I Talk to the Wind" by King Crimson
5. The first side of Low.
6. The second side of Low.
7. Your parents' best impression of their last 3 albums.
8. Charles Ives auditioning for Can.
9. The sense of embarrassment you (understandably) feel when you've poured yourself what you thought was vodka, but was, in fact, white vinegar.
10. Marital sex, conact-mic'd and run through a Digiverb pedal.
11. Guitars strung with human ligaments.
12. Muslim sacred music.
13. The Trees Community.
14. Kira Sedgwick trying, through song, to win back Kevin Bacon.
15. John Cage's "Dream".
16. William Baines.
17. Joan of Arc.
18. Joan of Arc.