Sleepies at Glasslands in January (more by Amanda Hatfield) 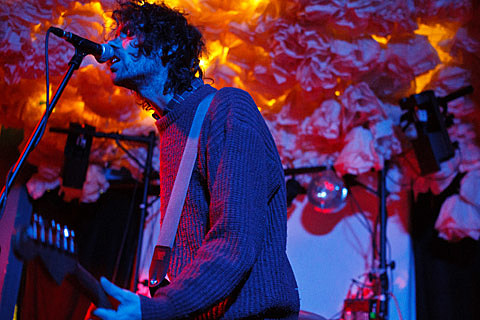 Brooklyn punks Sleepies play locally a lot, and they've got more hometown shows coming up with some pretty great lineups. This Tuesday (4/23) at Death by Audio, you can catch them opening for the Merge-signed Barren Girls on their previously announced tour (which also hits Cake Shop on Wednesday with Weird Womb and Prima). Advaeta is on the DBA show too. $7 gets you in at the door.

Sleepies will return to that venue on May 11 to join the previously announced lineup of Fat Creeps, Turnip King, and Zebu. Admission is $7 at the door. Both Turnip King and Fat Creeps have other upcoming NYC shows too.

Sleepies released their newest album, Weird Wild World, back in 2012 via Godmode (part of the Frenchkiss Label Group). It was produced by Ben Greenberg of fellow Brooklyn punks The Men, and along with that band and Nude Beach (who Sleepies have played with), Weird Wild World is one of the better representations of Brooklyn's current punk 'n' roll scene. The album is loaded with memorable tracks that see singer Thomas Seely snarling over huge, brash guitars, sounding fiercely sarcastic when delivering lines like "I take this all VERY seriously." But tracks like "Waste Water" prove they work in calmer settings, too.

You can stream the entire album on Noisey. Check out the music video for "Terra Firma," a live video of the band playing "Setbacks" at Death by Audio, and a stream of "Seriously," below.

Sleepies - "Setbacks" at Death by Audio