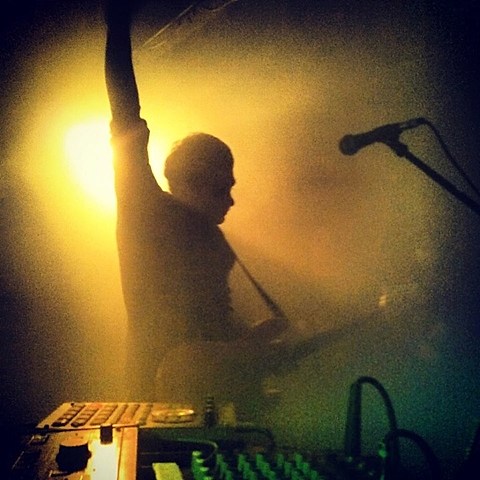 England's industrial dark wave specialists Natural Assembly released a music video for their new song "When We Two Parted," and it's a good'un. A mix of post-WWI era footage of London, sped-up flowers blooming and concert footage presented in a silent film visual style make for a dark and ominous canvas over which the seriously dance-y, synthed-out track plays. Love those drowned, echoing vocals. "When We Two Parted" is the first song off of a forthcoming Natural Assembly release due out early next year. If there was a ever a band that should play Nothing Changes, Natural Assembly is it. Check out the video below.

Speaking of below-Delancey's dark/no/cold wave party of record, Nothing Changes marched into December last night with a performance by the Argentine-German synth-pop duo Mueran Humanos (pictured above), who are currently in town recording a follow-up to their 2010 self-titled at Heaven Street Records. Did you go? Good time?

In Batillus news, the Brooklyn doom bruisers just put out a cover of Ministry's "Lava" that will be on a forthcoming 7" with Kowloon Walled City, who contributed a cover of Godflesh's (touring soon) "Anthem" for their half. Both sides of the split are streaming below. Batillus' song "Concrete" was also just given a very creepy remix by Andy Stott (who they've played with), which you can hear at Pitchfork.

Check out the Natural Assembly vid, upcoming Nothing Changes lineups, and the Batillus/Kowloon walled City streams, below...

Natural Assembly - "When We Two Parted"