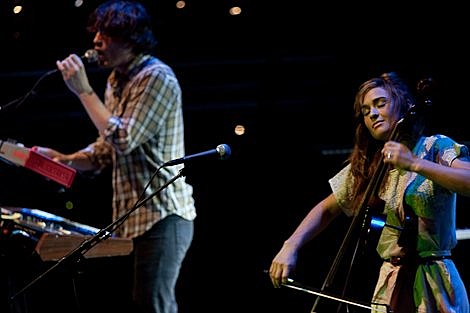 Ra Ra Riot will be making even more appearances in NYC in the coming month. The Syracuse band's onslaught begins on August 24th (Tuesday) when the band celebrates the release of it's new LP The Orchard (via Barsuk) with a FREE acoustic set at Soundfix Records at 6PM. Later that night, the band will be at a second FREE event, a 21+ DJ party at Brooklyn Bowl featuring the band and Vampire Weekend swapping turns on the wheels of steel (neither band is scheduled to play live music).

As previously mentioned, the dates are part of a much larger tour that will see Ra Ra Riot play from sea to shining sea (and Bumbershoot) as part of a full US campaign towards total da-da-domination.

We Barbarians open much of the tour. Other tour openers and updated tour dates, and a video, below....