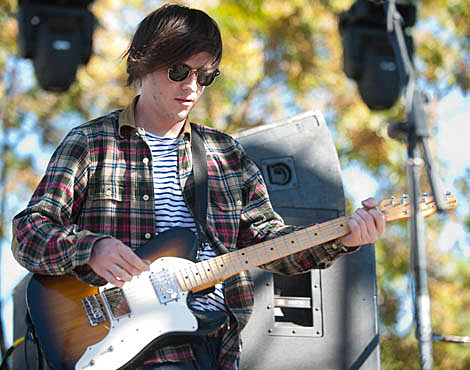 Guster, Chief Xcel of Blackalicious, Darker My Love, Natalie Hemby, Crystal Antlers, Bishop Allen, Jenny O, Little Jackie, Ceci Bastida, and "Best Coast, Wavves" have contributed new songs to a Target Christmas album which is currently streaming at Target's site (a download of the songs is "coming soon"). Maybe the two bands will perform the song live when they collaborate on stage during their 2011 tour together. Best Coast's Bethany Cosentino told SPIN:

"We're both in summery California bands and I think by doing the tour in winter, we're bringing summer to places where it's fucking freezing," she says. "We've been talking about what we want the vibe to be -- we want it to be a beach-themed sort of thing, but we're still brainstorming."

Cosentino and Williams haven't planned all details of their sets yet -- Wavves are currently touring in Europe -- but she says fans can definitely expect some on-stage collaborations between the acts. "I'm sure we'll end up doing some songs together," she says. "We were joking that the whole show should be a Wavves-Best Coast jam, but everyone would probably just want a refund if we did that."

Williams also promises there will be a special, limited-edition piece of merch for sale. "I can't say what it is but it's definitely cool," he says. "I think we're also gonna breed cats before the shows and sell them at the merch table."

That tour kicks off on 1/21 on their home coast which is also where it ends on 2/26. Along the way they hit, as previously mentioned, Webster Hall on 2/2. They'll also be at the smaller Music Hall of Williamsburg in Brooklyn one day later. Tickets for both NYC shows are now on AmEx presale. Regular sale starts Friday at noon.

No Joy, who you maybe caught during CMJ, opens almost every show on the tour.

Other upcoming shows for Best Coast include two dates with Weezer, and EIGHT shows in FOUR DAYS at the SAME LAS VEGAS HOTEL (the new Cosmopolitan). Not sure what that is all about, but all dates are listed below...