ZZ Top at The Paramount in 2013 (more by Greg Cristman) 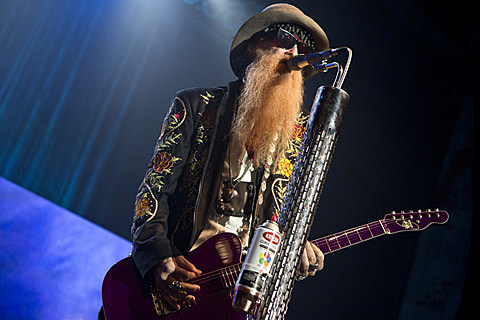 Iconic boogie rockers ZZ Top will be on tour next year now that bassist Dusty Hill is recovered from a hip injury that caused the band's tour with Jeff Beck to be cut short this past August (including a show at Jones Beach). A few of the dates with Beck have been rescheduled, but not Jones Beach. The closest the dates come to NYC is Red Bank, NJ's Count Basie Theatre on March 11 (tickets) and Kingston, NY's Ulster Performing Arts Center on March 13 (tickets).

In related news, ZZ Top's Billy Gibbons is one of a slew of classic rock veterans are coming together to support, well, veterans. The third annual edition of Wall Street Rocks also features bringing Warren Haynes from Allman Brothers, John Popper from Blues Traveler, Late Night with David Letterman band members Will Lee and Anton Fig  and other "all-star musicians" for a show to benefit war veterans at the Highline Ballroom on November 10. Tickets for the show are on sale now (just keep in mind that the money is going to a good cause when checking out those prices).

Billy Gibbons is also playing Brooklyn Bowl on November 11, the day after the veteran's benefit. Tickets for that show go on sale Friday (10/3) at 10 AM.

While Warren Haynes may be playing in November, Allman Brothers are calling it quits at the end of October. The band's final shows are happening at Beacon Theatre on October 21-28. Tickets for all of the Beacon shows except the 24th are already sold out. There are also Allman Bros afterparties at BB King's on October 24 and October 25, the latter of which features Allman Bros drummer Jaimoe's Jasssz Band.

All ZZ Top dates are listed below...