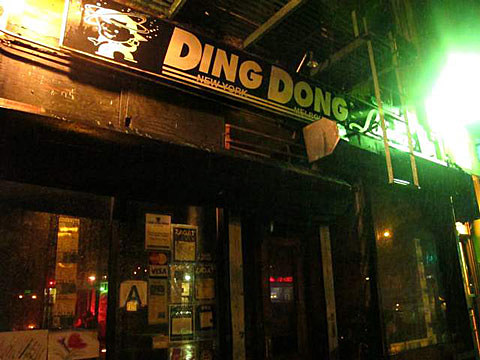 Sad news for Upper West Siders of the no-collar persuasion: Ding Dong Lounge, the punked-out dive bar and venue at 106th and Columbus, is closing on Thursday, July 31 after 13 years in business. The bar will be relocating to an as-yet undisclosed location.

Like so many other unique New York City businesses, the Ding has lost its lease, despite having the highest sales in its 13 year history and being named the Best Cheap Manhattan Dive by both the Village Voice (link added - ed.) and Gothamist.

This is not the end of the Ding, as we will be relocating & reopening in the near furture (watch this space for details). However, for right now, please come out to show some love and say goodbye to our beloved Ding Dong Lounge during our last days at the Columbus Ave & 106 St. location.

We love you all!

Ding Dong Lounge was a grungy oasis for people looking for a no-frills place for cheap drinks in an otherwise pretty bleak part of town where forgettable, overcrowded bars are the norm. As mentioned above, the bar received accolades for being the best dive in Manhattan -- not bad for a place not much further than a stone's throw from Columbia University. Good music and colorful staff -- which allegedly included a stuntman who was, among other interesting gigs, a weapon specialist in Mortal Kombat (the movie) -- helped make the place great. Ding Dong DJ/doorman Chris should be familiar to patrons of The Acheron, where he also works. Mark, thank you for all the drinks.

The space played host to hundreds of shows, typically of the somewhat-underground indie/punk variety, and had a number of weekly regular events. One memorable show for me was headlined by the experimental noise rock band White Suns, who just played Summerscreen. The opening band was a three-piece named Bob Crusoe, an absurdist "guitar," drums and off-key trumpet (I think) band that delivered one of the most ridiculous performances I've ever seen -- pure cacophony, with nonsense lyrics/noises that were alternatively spoken and hysterically screamed over one of the worst improv sets of all time. Lots of rolling around on the ground. A+.

It's been a bad week for NYC dives. The Ding Dong Lounge will be missed. Here's to a quick reopening.