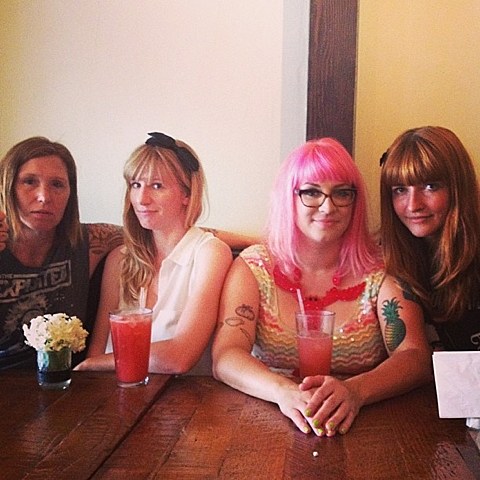 Back in 2011, former Vivian Girls drummer and then Best Coast drummer Ali Koehler announced her departure from Best Coast, and other than a few solo tracks released around that time, she's been pretty quiet since. Now Ali's back fronting a new band called Upset, who will release their debut album this fall via Don Giovanni Records (Screaming Females, Waxahatchee).

Ali formed the band with drummer Patty Schemel, who played in Hole from 1992 to 1998 and recorded on their albums, Live Through This and Celebrity Skin, and had stints as the drummer for Courtney Love's solo career and Juliette and the Licks; and guitarist Jenn Prince, who is/was in La Sera. They played their first show at The Echo in LA with Parquet Courts this past January.

More recently they've announced the addition of their new bass player (wait for it...) Katy Goodman, who Ali was bandmates with in Vivian Girls, and who Jenn was bandmates with in La Sera (which Katy fronts), has a solo project, Kickball Katy, and recently formed the duo Books of Love. Check out an 11 second video of the band rehearsing a Guided by Voices cover with Katy on facebook.

Upset's debut album is being produced by Kyle Gilbride, who plays in Swearin' and also produced the latest Waxahatchee album. They haven't released any music from the album yet, but if you live in California, you can hear some of it at their many upcoming shows, all of which are listed below.