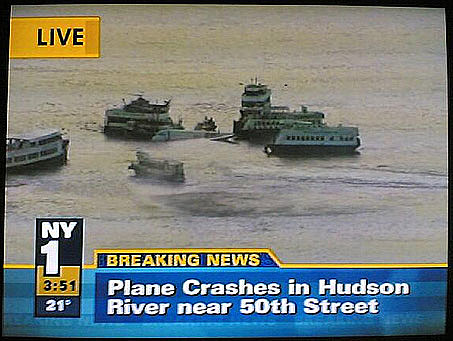 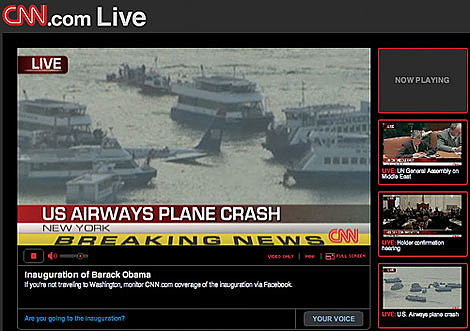 "NEW YORK (AP) -- A US Airways plane has crashed into the Hudson River, sending passengers fleeing for safety in the frigid waters. New York City firefighters are responding to the crash. It was not immediately clear if there were injuries. Witness Barbara Sambriski, a researcher at The Associated Press, said, "I just thought, 'Why is it so low?' And, splash, it hit the water." [Associated Press]

"Eyewitness News has learned a plane has crashed into the Hudson River. The plane is a US Airways flight 1549 from LaGuardia to Charlotte. There were 146 passengers on board the flight, along with 5 crew members. There is no report on their conditions. The plane went down near 57th street. The plane took off from LaGuardia at 3:11 p.m. Ferries are rescuing passengers, some who are seen standing on the wings of the plane." [ABC News]

NY1 is saying it went down near 50th street, near the Intrepid. The plane is still intact and floating downstream. It may have hit birds, and seemed to be more of an emergency, and "smooth", landing... They said a witness said all passengers survived.

CNN is reporting from the rescue area. Said people are in good shape, but freezing and shivering in blankets. A witness said he thinks everyone got off the almost-full plane. The pilot reported a "double bird strike".

The West Side Highway is closed at 34th St...

The water is 40 degrees. Circle Line boats are helping with the rescue.