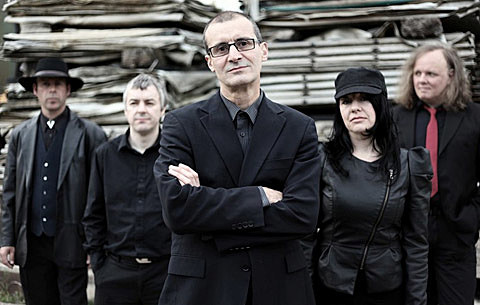 John White was U.V. PØP right from the start. First as a one man band for the 80s when he began playing live in the early part of 1982.. Early concerts included supports with In The Nursery, Danse Society and the fledgling Pulp.... His first single was Recorded and Produced by Cabaret Voltaire - it took him to a support slots with hitherto unknown Culture Club, John Cooper Clarke and Nico... As John's catalogue expanded - first with the critically acclaimed "No Songs Tomorrow" album and it's follow up "Bendy Baby Man" so did his band - ditching the revox for a clutch of fellow travellers... "Serious" has become a favourite across Europe - with a multitude of dance mixes. Among darkwave enthusiast -" Sleep don't talk" stands as a classic. Both Serious and Sleep don't talk have been covered by European bands, Escape With Romeo and Strafbomber respectively.

After a bit of a hiatus, U.V. PØP is back in action, celebrating 30+ years as a band and prepping a reissue of their No Songs Tomorrow LP for an April release via Sacred Bones (and Italy's Mannequin Records). Listen to some songs below.

The band will play a select set of shows around the release in NY and possibly elsewhere. They may not be all announced, but a pair in NYC have been. Those are April 18th at Home Sweet Home (Wierd party) and April 20th at Saint Vitus (possibly with HELSTAR). The former is being advertised as their US debut. Tickets are on sale for the latter.

Stream some material from U.V. PØP, alongside all known tour dates, below..