photo: TITD at Gramercy Theater in 2011 (more by Greg Cristman) 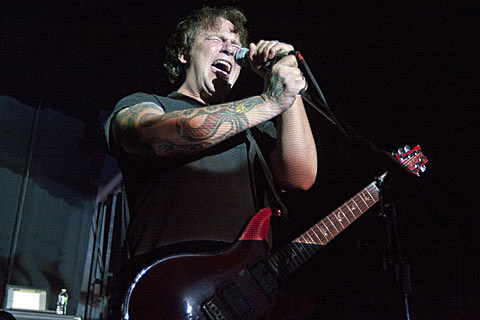 UXO, the collaboration between Chris Spencer and Steve Austin of Unsane and Today is the Day, are streaming their new album in full, and you can listen to that below. The self-titled album, out now on Reptilian Records, is a crusher, a legitimately terrifying hybrid of what the two bands have done so consistently well for years. The noisy squall of TITD and the ferocious riffing of Unsane merge into one entity, and the result is one of the heavy highlights of 2016 so far.

UXO have a few dates coming up, including NYC's Saint Vitus on February 26 with Primitive Weapons and The Austerity Program. Tickets for that show are still available.

Today is the Day also just announced a stacked west coast/southern tour with Weedeater, Author and Punisher and Lord Dying. They also just premiered a video for "Animal Mother," off their recent album of that title. Watch that, check out the tour dates, and listen to the UXO album, below...