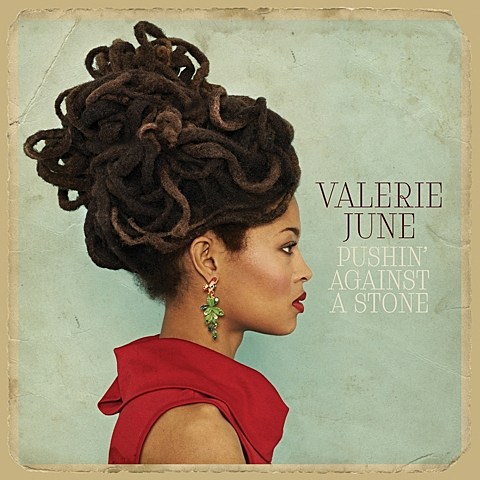 Memphis singer/songwriter Valerie June doesn't sound like Stevie Nicks, but that was the first person who came to mind when I heard just how unique and powerful she sings. Her debut album, Pushin' Against A Stone (due out 8/13 via Concord), was co-produced by The Black Keys' Dan Auerbach (with Kevin Augunas), and the pairing is more than appropriate on a track like "You Can't Be Told" (stream on NPR), which isn't too far off from Auerbach's own band. But on another, "Twined and Twisted," Valerie is backed only by gentle acoustic guitar, and a song like this makes her far more than just "another Black Keys band." It rings of Song to a Seagull-era Joni Mitchell, and despite its old soul, sounds entirely in the now. That track makes its premiere in this post, and you can stream it below.

Valerie had toured with Jake Bugg earlier this year (maybe you caught their Bowery Ballroom show), and this August she'll head back out on the road for a headlining US tour. That tour includes a return to NYC, where she'll play an album release show on August 14 at City Winery with Tall Tall Trees. Tickets for that show are on sale now.