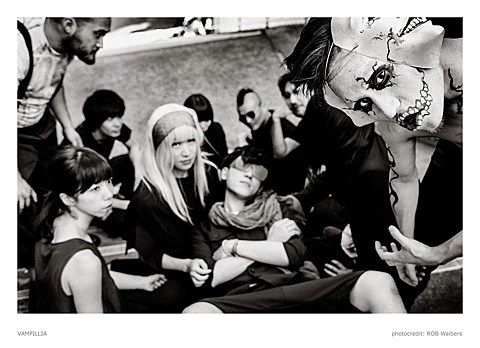 Members are consist of 3 vocals; the ugliest rock star Psychic Yamanashi whose voice is nothing but annoying. Another vocal is Death voice from wood cutter Mongoloid who is very manly with secret naive heart. Mysterious Opera voice from beastly monster Velladon. They are backed by 3 strings; Punk and Classic, Progressive, also by piano, twin guitars, base, broadcasting. Main drum is skillful Chikada famous of World's end girlfriend, and support drum is Tatsuya Yoshida from Ruins. There are Toyohito Yoshida from BOREDOMS as a guardian god.

If you're not familiar, Japan's Vampillia are an extremely odd offshoot of the legendary noise/punk band Boredoms -- the anything-goes chaotic vibe is similar, but Vampillia focuses more heavily on pomp and theatricality. You can check out the thoroughly weird video they produced in advance of their upcoming SXSW performance below. They've also toured with the likes of Jarboe and Nadja; you can hear their excellent recorded collaboration with the latter below as well.

Vampillia will be returning to SXSW for the third time this year, and they'll be putting in a number of other live appearances during their time in the country as well. Three of them will be in New York City. First, they'll play at Silent Barn on March 8 alongside Mick Barr (playing a rare 'slow' solo set), Kevin Hufnagel, & MV Carbon. Two days later, they'll play Death By Audio on March 10, along with Colin Marston, Geryon, & Mossenek, which is Barr's collaboration with vocalist Chuck Bettis. (Mossenek have an upcoming release on American Tapes; they also have a full-length and a Japanese tour w/ Nadja and Vampillia in the works.) Since Geryon features both members of Krallice's rhythm section and both Marston and Barr hold down guitar spots in the band, their entire lineup will be performing...separately. How often does that happen?

Vampillia will put in one more NYC appearance after SXSW -- they're playing the Knitting Factory on March 16, along with Jungles From Red Bacteria Vacuum, Zarigani$, Happy, & Starmarie, as part of the "Japan Nite" tour (which also includes an appearance at Athens's Slingshot Festival). Tickets are available.

Mick Barr also has a third NYC show coming up -- March 21 at Secret Project Robot, alongside Ornament & Total Life, both of which are offshoots of the experimental unit Growing.

Check out the aforementioned Vampillia jams and the list of all of their currently announced dates below...