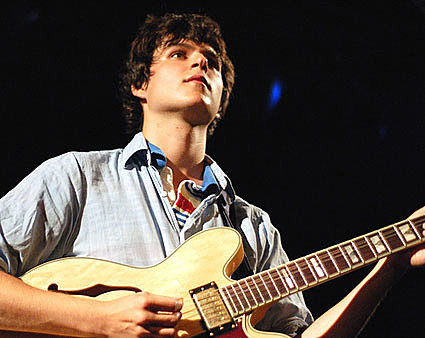 No band is more hotly debated among NYC music-heads right now than XL Recording's latest signing (and critical darlings - and don't forget Sasha) Vampire Weekend. Very few argue that the band isn't making enjoyable, catchy music. Some just seem to be offended, or confused, by the vanilla nature of it. My favorite line came from a friend who recently dubbed them the "Jimmy Buffet of indie rock". Then again, that friend hates everything. And from Central Village:...

Vampire Weekend played to a sold out crowd at the new around-600-capacity Music Hall of Williamsburg in Brooklyn this past weekend. Were you there? (don't worry - this site allows commenting anonymously). A week before that, they opened for Clipse at a free show on the steps of Columbia University (their alma mater). Undisputed Wes was at the Columbia show, and he reports...

They were enthusiastically received by the students, some of which seemed to know the words to a good amount of the songs. They divided their set equally between bouncy, danceable indie rock, and Paul Simon-esque African-infused indie pop with a smidgen of world music. Dancing/awkward teenage hopping took place and the banter ranged from distractingly long to endearingly funny.