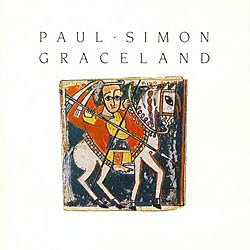 Vampire Weekend's 2008 debut album was quick to draw frequent comparisons to Paul Simon's 'Graceland' for its incorporation of African musical influences. But the band members are quick to dismiss the notion.

"In some ways the fact that it's the only thing that comes up can be kind of frustrating," said Vampire's singer and guitarist Ezra Koenig in front of an audience at the TimesCenter on Saturday as part of the New York Times Arts and Leisure Weekend event. "It makes it sounds like that we're totally one-dimensional, that all we do is rip off Paul Simon. Even from the early days that became like a thing. I think the first time [somebody] yelled 'Paul Simon!' That was in Omaha, Neb., and I was angry for the rest of the show."

The band members approached the source himself to get his opinion of their work. "We did actually get to meet [Simon] when we did 'Saturday Night Live,'" Koenig said. "Rostam [Batmanglij, our guitarist,] had the forward thinking to say straight up, 'Do you think our album sounds like Graceland?' And he said, 'Not really.'" [Spinner]

Tickets are now on Am Ex presale for the two Paul Simon shows @ Beacon Theater.