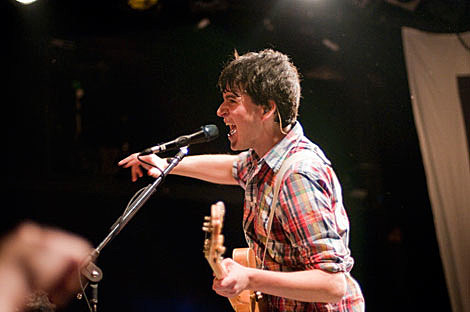 In the spring of 2006, Columbia University senior Rostam Batmanglij was entertaining literary society parties with his fledgling postmodern Afro-pop band, Vampire Weekend, and wondering if he could pull off life as a professional musician. By the spring of 2008, he was playing the band's runaway hit single, "A-Punk," on Saturday Night Live. Vampire Weekend's self-titled debut had been out only a few months, but fans and critics had been clamoring over it for most of the year. After months of feverish blog hype and the release of an EP that only stoked the fires, the band landed on the March 2008 cover of Spin, which annointed them the year 's Best New Band before their album had even come out -- a first in the magazine's history. Looking back, it still seems insane that a bunch of cerebral schoolboys in pastel cardigans could go from cramming at the library to performing on SNL in the span of a couple of semesters. But according to Batmanglij -- the band's producer, co-songwriter, multi-instrumentalist, and sole gay member -- Vampire Weekend was meant to be huge. "We all had a strong feeling about the band from the early days," he says. "We had this opportunity to be really out there and avant-garde, but also commercially successful." [Out]

The last time they played NYC, in January, the band did three nights at three venues: United Palace, Webster Hall and Bowery Ballroom.

They currently have shows booked around Europe, the United States (most with Abe Vigoda opening) and Australia. All those are below.

They just put out a new tennis-centric video for their song "Giving Up the Gun" with cameos by RZA, Jake Gyllenhaal, Joe Jonas of the Jonas Brothers and Lil' Jon. That's below...