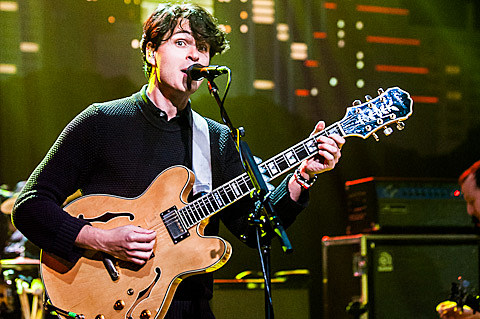 The Q Live with Jian Ghomeshi taping with Vampire Weekend happened last night (3/28) at Jay College. Made for Canadian channel QTV, it featured VW performing three songs from their upcoming Modern Vampires of the City LP and they were interviewed as well. The show is up for streaming as a whole program (in two one-hour segments) so you have to skip around a bit. They open the show with "Diane Young." Then in the second streaming player, they perform "Unbelievers" at the 19 minute mark and then the third song, "Ya Hey," is at 43 minutes in. Or you could watch the whole thing, it also features David Cross, Alan Alda and Cyndi Lauper. You can watch it below.

Vampire Weekend recently taped an episode of Austin City Limits and while an air date hasn't been set, BV Austin was there and they have a full set of pics. Meanwhile, Vampire Weekend provoked the ire of car afficianados with the video stream for their song "Diane Young" which features a couple 900-series Saabs being burned in slow motion. Car blog Jalopnik called the band "a bunch of dicks" for not telling the previous owners what they were going to use the cars for. Said the towing company:

Ready for a Saab story? These two cars will be lit on fire in a music video on Saturday. The previous owners I picked them up from were telling me all of the nice times they had in them and to make sure to take care of them. Little do they know they will be charcoal in 2 days. Both said they wanted to see the finished video. It was hard to keep a straight face while they proclaimed their love for these Junkers.

"I want people to understand that we do respect cars and the last thing we want to do is to fuck up a collector's item or something like that," Vampire Weekend singer Ezra Koenig tells Spinner. "Hopefully people believe me when I say that our record label was looking to purchase the cheapest, oldest cars possible; they weren't trying to buy a beautiful perfect condition car."

In fact, Koenig claims, his songwriting partner and group multi-instrumentalist Rostam Batmanglij has a special affinity for the now-bankrupt Swedish automaker.

"Rostam especially loves Saabs," Koenig claims. "When he grew up his family drove a Saab."

They would've never done that to a Volkswagen! Anyway, let's move on. Tickets for Vampire Weekend's upcoming Roseland Ballroom show go on sale Saturday (3/30) at 10 AM. Also VW bassist Chris Baio will be at tonight's BAM screenings of the film he scored, Somebody Up There Likes Me, along with its star, Nick Offerman, for Q&As at 7 PM and 9:30 PM. Tickets for that are still available.