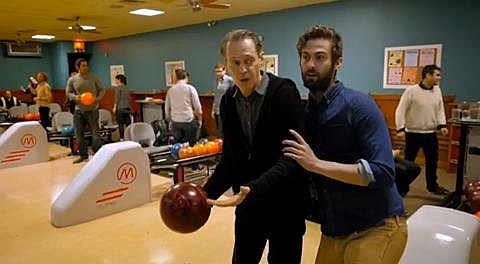 We're only a couple weeks out from Vampire Weekend's third album, Modern Vampires of the City, which hits retailers digital and physical on May 14. Look for the band, who just played Coachella, to preview tracks from the album at their sold-out show on Sunday (4/28) at Roseland Ballroom which is being broadcast live on the internet as part of the American Express Unstaged Performance series. The webcast, which is being directed by Steve Buscemi, starts at 9 PM EDT.

For those in NYC who would like to make the webcast experience a little more concert-like, Brooklyn Bowl, with help from the Tribeca Film Festival (which concludes on Sunday), will be showing it live on their many giant HD screens with "full concert sound." It's free entry.

Speaking of bowling, Vampire Weekend and Steve Buscemi, the band and Boardwalk Empire star are continuing to play out their friendship on the web with a second installment of the "documentary" about prepping for the Roseland show, which ends up at Brooklyn's Melody Lanes. There's also other episodes -- one with Grimes -- and you can watch them all below.

And last but not least, Vampire Weekend will appear on the May 11 episode of Saturday Night Live which is hosted by former castmember Kristen Wiig. So get ready for affable indie rock and the probable return of Gilly. Kanye West and Ben Afleck will apear on SNL's 38th Season Finale on May 18, and next weekend (May 4) it's Zach Galifianakis and Of Monsters and Men.

All upcoming Vampire Weekend tour dates (there are some new ones including Hollywood Bowl with Beirut, not NYC) are listed, along with the bowling video, below...