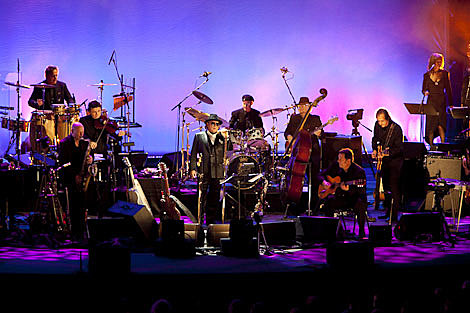 But over the years, [Astral Weeks] kept coming up. It was a perennial favorite in polls with titles like "What is the greatest album of all time?" On the other hand, Morrison himself had been content to forget the album ever happened.

"It was suppressed in my memory," Morrison says. "As far as I was concerned, it just didn't exist."

Now, the album has an almost mythological status in pop culture. Everyone from Glen Hansard to Johnny Depp has talked about how it changed their lives.

"Rock is a brainwash -- I think that's where your mythology goes back to," Morrison says. "It's the most pretentious area in music. It's got singers who don't really sing." [NPR]

Van Morrison has a few more 'Astral Weeks' shows lined up for this fall. But when he comes to NYC's Theater at Madison Square Garden, one of the NYC venues he played 'Astral Weeks' at earlier this year, on October 25th, he'll be presenting "An Evening With Van Morrison." Tickets for that show are on sale now.

All tour dates, with a video of Morrison being interviewed by Time about the Astral Weeks shows, below...