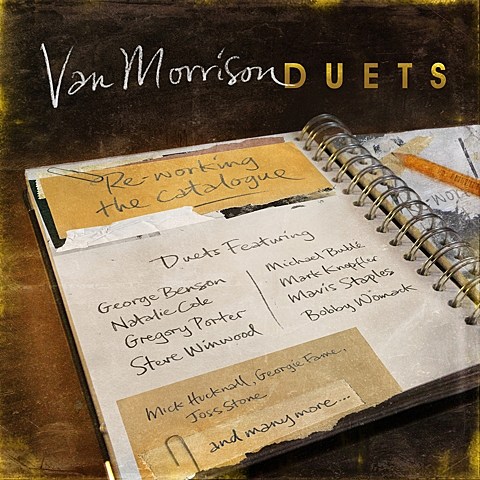 The duets album is often a stroke session that involves a minimum of thought -- but not for Van Morrison. Duets is as cantankerous and eccentric as any of the man's other projects. Rather than just bring in a few glossy names to decorate his greatest hits, he digs up deep cuts from mostly overlooked albums. (You won't find anything from Moondance or Astral Weeks here.) And his partners range from grizzled vets -- Steve Winwood, Mavis Staples, Taj Mahal -- to surprise guests like Natalie Cole, Mark Knopfler and Michael Bublé. Even if the artists probably figured they were signing on for "Into the Mystic" or "Tupelo Honey" karaoke, they rise to the Van challenge, helping him rescue songs that only die-hards know. [Rolling Stone]

Music legend Van Morrison's new album Duets: Re-working The Catalogue is out now, and he'll be doing a good amount of touring this year in support of it.

The tour includes a NYC show with Duets collaborator Taj Mahal happening June 19 at Forest Hills Stadium. Tickets for that show go on sale April 25 at 10 AM with a Citi presale starting Tuesday (4/21) at 10 AM.

All dates are listed, with a video of Van and Taj, below...