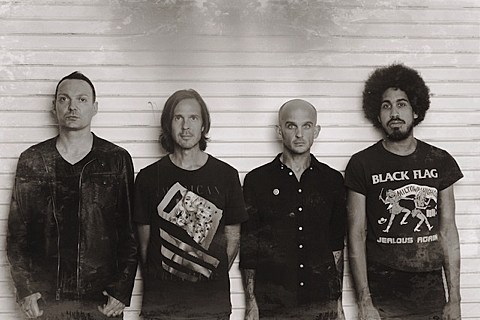 Earlier today we mentioned that post-hardcore veteran Walter Schreifels (Gorilla Biscuits, Youth of Today, Quicksand, Rival Schools, etc) would be playing the Iron Pier CMJ showcase (BV co-presents) with his new band The Dead Heavens, along with Self Defense Family and Dee Pockets. That's not the only new band Walter has though. He's also fronting Vanshing Life, for which he's joined by two Trail of Dead members, Jamie Miller and Autry Fulbright, and Rise Against's Zach Blair. Their debut 7", "People Running" b/w "Vanishing Life," is due out October 14 via Collect Records, the label Thursday/United Nations' Geoff Rickly runs with Texas is the Reason's Norman Brannon. Walter's produced a variety of sounds over the years, but so far Vanishing Life is sounding pretty in line with his '90s post-hardcore stuff. Hear it for yourself by streaming the a-side of the new single below.

The band are set to make their live debut on October 18 in New York with two in-stores that day: one at 2 PM at Generation Records in NYC and another at 6 PM at Looney Tunes Records in West Babylon. They'll be playing a brief set and doing a signing at each.