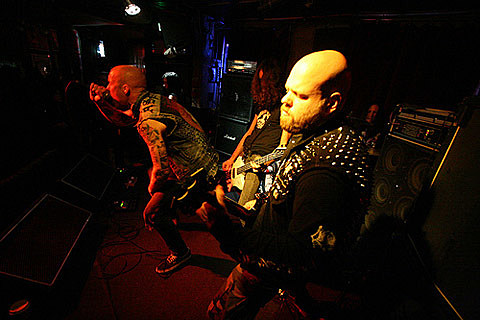 Underground metal label 20 Buck Spin (who, speaking of Pentagram, are named after a Pentagram song) have welcomed Vastum to the roster. Vastum are an unholy and punishing death metal beast from the Bay that features members of incredible acts like Infest, Acephalix, Saros, and Hammers of Misfortune. Carnal Law is the band's debut offering of galloping, mid-paced crusty death metal that draws more from the Autopsy/Entombed/Bolt Thrower school and forgoes flashy technical wizardry. Remember when death metal was truly brutal and not filled with post-production studio trickery? Vastum does. Stream Carnal Law in its entirety below and order a copy at 20 Buck Spin.

Meanwhile Acephalix is also preparing to release Interminable Night, their new disc for Southern Lord/Agipunk on May 24th. Drawing from similar influence as Vastum (Acephalix makes up 3/4 of Vastum), the band's new LP picks up where the band's pummeling debut full length Aporia left off with more crusty death metal and mixing in touches of d-beat destruction. Get the record on LP via Agipunk and the CD via Southern Lord, and look for them on a mostly West Coast tour that includes a stop at Chaos in Tejas (no NYC at the moment unfortunately).

All current dates, and the album stream, below...