Kevin Hufnagel on stage with Vaura (more by Greg Cristman) 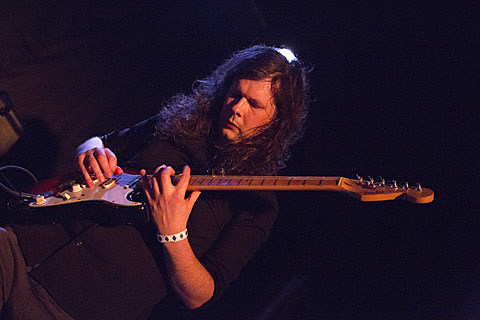 Vaura are back from a successful round of dates with Alcest that kicked off with a sold-out show at Public Assembly (pics). The band's well-received Selenelion is out and making noise, spawning a pair of video treatments including "Drachma" and "Obsidian Damascene Sun", the latter of which comes courtesy of Terrence Hannum (Locrian) and makes its world premiere here today. Check that out below.

If you haven't seen Vaura, you have two vastly different chances to do so in the coming weeks. Next week Vaura will play a special acoustic set at The Stone (on 4/20 with a Kevin Hufnagel acoustic set right before it!) followed by a show the nest week at Death By Audio on 4/28 where the band will enlist their other projects Dysrhythmia and Kayo Dot for the show (yes, their family).

Check out both Vaura videos, including the Terrence Hannum (Locrian) produced "Obsidian Damascene Sun" below...