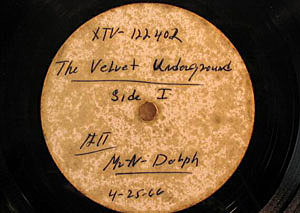 The news media continue to report that the rare Velvet Underground record sold on eBay for $155,401 this weekend to a mysterious bidder called "mechadaddy". Not only do I think I may have figured out who mechadaddy is (not Lou Reed), I think he may not actually be a winner at all. If the Globe and Mail is to be believed:

This is because the highest bidder in a 10-day online auction for the fragile acetate that ended last Friday evening "has proved to be bogus," a disappointed Warren Hill said yesterday. He's the 30-year-old Montrealer who, in September 2002, innocently paid 75 cents for the 12-inch, nine-song acetate after finding it at a street sale in New York's Chelsea district......On the weekend Saturn received an e-mail from the supposed winner who said a friend, unbeknownst to him, had, as a lark, bid on the acetate using his (the supposed winner's) computer at work and account number. "Ohmigod, I'm so sorry," the e-mail read in part. "I can barely afford gas for my car" let alone more than $150,000 for a 40-year-old disc of acetone-covered aluminum.

Strangely, that's the only article that has this info so far.

So, I thought I had maybe figured out who the buyer was -- then I found the above article, and now instead it looks like I may have only figured out who the buyer WOULD HAVE BEEN had he not been a phony. I could be wrong, but anyway, all roads lead to this guy AKA this guy AKA this guy AKA THIS GUY. Even more interestingly, the guy in question is involved with a soon-to-be-launched LA-based music site not very different from the one you're reading at this very moment. Oscar could not be reached for comment.