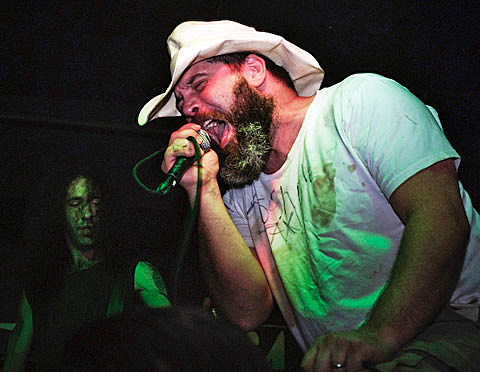 Dan Lilker and Kevin Sharp just played Europa with Brutal Truth. Now the grind band has scheduled a new show with Venomous Concept, their side project with Shane Embury and Danny Herrera of Napalm Death. Europa gets the look on September 23rd, tickets are on sale. The show is the lone US date thus far, with a string of dates in Japan currently on tap for the weeks prior. So far, no word on the upcoming Wolfbrigade and Bruce Banner splits or the upcoming album the the band discussed late last year.

Just a few weeks before that Europa will also play host to Japanese hardcore badasses Systematic Death, who will take the stage with the mighty Dropdead (!) for a show at Europa on September 18th. Tickets are on sale. The show is so far the lone date for Systematic Death, though Dropdead has a local show at AS220 in their native Providence, RI on 8/14.

And while we're on the subject of Japanese hardcore, A.G.E. are scheduled to tear down Knitting Factory with the freight train known as Hellshock (!) with support from Parasytic, Cervix, Perdition. The show goes down on devil's night (Oct 30th, how appropo) and tickets are on sale. Hellshock's They Wait For You Still dropped in the tail end of last year. Again, no other US dates for A.G.E. so far.

All Venomous Concept dates and some video below...