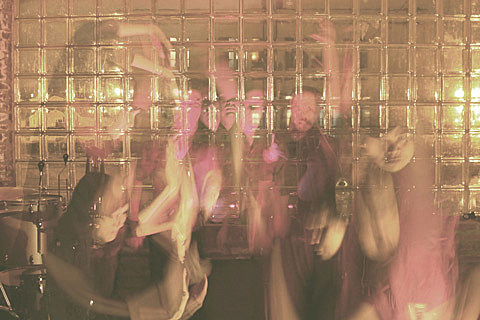 Chicago's Verma intertwine elements of gothy post-punk, krautrock, Eno-esque ambience and Detroit-style burners into a heavy, groovy psych sound. The band's new album, Sunrunner, will be out on May 27 via Trouble in Mind and we've got the premiere of the first song to be released from it, "Hologrammer." Building off a throbbing bass riff, the song layers on guitars, organ, synths, and singer Whitney Johnson's wailing vocals as it builds and builds. Fans of Loop (who just played here last week) might hear some parallels. You can stream it below.

Verma have some live shows lined up for the spring, including two in Brooklyn: they play the Deleted Scenes show on May 21 at Baby's All Right with Massachusetts band Krill, and then May 22 at Death by Audio with Philly's Ecstatic Vision and Brooklyn psych band The Golden Grass. Advance tickets for the Baby's All Right show are on sale now.

All dates are listed, along with the "Hologrammer" stream and LP artwork and tracklist, below...