Veronica Falls are back for what is, by far, their biggest NYC show to date: they play Music Hall of Williamsburg on Thursday. The band's debut was my #2 Album of 2011:

"Found Love in a Graveyard" made my Favorite Tracks of 2009 list and have been waiting a full-length ever since. The band does not disappoint. There's not a dud in Veronica Falls' 36 minute running time. New songs are equals to early singles which appear here in newly recorded versions that might actually improve on the originals. This is haunted pop, a brisk October breeze that calls for a nice cardigan.

Veronica Falls just released a new track, "My Heart Beats," to coincide with their North American tour and you can stream it at the bottom of this post. The song is sunnier than what they normally do but still fits within their sound. Sounds like a single to me. The band are touring with Slumberland labelmates Brilliant Colors (in from San Francisco) and local noisemakers Grooms are also on the bill.  Tickets are still available. Veronica Falls look timid in their press photos, but they whip up a storm live. Go see 'em. 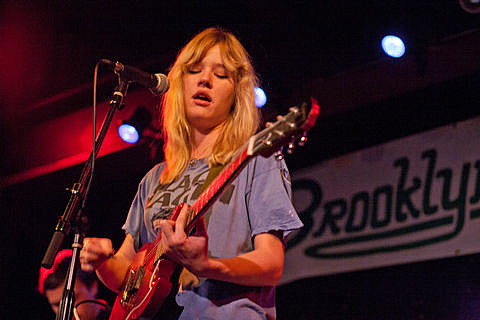 After the MHoW show, Bleached will also be part of the Veronica Falls/Brilliant Colors tour. (Dates at the bottom of this post.) The band are currently on the road with The Black Belles, a tour that rolls into town onSaturday (2/11) at Knitting Factory that also has Bleeding Rainbow (formerly Reading Rainbow) and Habibi on the bill. I caught Bleached at the BrooklynVegan day party during CMJ last year and thought they were a lot of fun in a Runaways kind of way. Good snarly attitude and big hooks. Maybe you caught them last week opening for Smith Westerns at Webster Hall?

It's worth showing up early for Habibi, whose debut single (streamable below) is a cool, understated take on '60s girl group sounds. You can stream it below.

As excited as I am to see Veronica Falls on Thursday (2/9) , I might be slightly more pumped to catch Cate Le Bon's early set at Mercury Lounge that same night. (She also plays Maxwell's on Friday [2/10] as part of her tour) I've been pretty enamoured with the Welsh singer's new album, Cyrk, that came out a few weeks ago. The spare, detached vibe is a little like the Velvet Underground or Electrelane or Stereolab, but there's a hint of pastoral psychedelia in there too. (Shades of Welsh indie royalty Gorky's Zygotic Mynci). The record is loaded with wonderful little touches that reveal themselves with repeated listens. It's a fantastic album.

You can download single "Puts Me to Work" at the top of this post and stream Cyrk at Spotify. Cate has played New York a few times, usually solo, but for this tour she's got her band with her which should be pretty special. Both shows are with local band Pigeons.

What else is going on? London born, Brooklyn-based singer Ed Vallance released his second album, Volcano, this week and plays a record release show tonight (2/8) at Pianos. The record is dramatic turn from the indie folk of his debut. I bet he still writes his songs on acoustic guitar, but the approach to the arrangements and production are definitely have definitely taken a pop approach this time. While this sort of stuff isn't in vogue so much these days (it's got a distinct early '00s post-Radiohead vibe) it's quite lovely nonetheless. You can download the single "Crystaline" at the top of this post and stream the album at Spotify.

In addition to tonight's show at Pianos, an early show with Pursesnatchersopening, Ed's doing a month-long residency at the Ace Hotel, playing every Sunday in February.

And finally, K Records artist Jeremy Jay is in town this week, playing Glasslands tonight (2/8) and Cake Shop tomorrow (2/9). Jeremy's most recent album is Dream Diary, which came out about a year ago. Like most of his work, it's minimal folk rock with a strong '80s influence. He's an engaging live performer, and tonight's Glasslands show is a stacked bill with Boston psych-folk band Quilt, quality locals Slowdance and Backwords. The Cake Shop show is with Sapphire Mansions and a couple TBDs. (Cake Shop's website isn't especially updated these days.) Jeremy lives in London these days, so go see him while he's here -- all tour dates are at the bottom of this post.

That's the big stuff this week. Some more day by day picks, of things not already covered, are below.

The second week of Old Monk's Cake Shop residency is tonight. These guys are good! Tonight's with Haybaby, elctro-rockers Year of the Tiger and Code Name Viper. 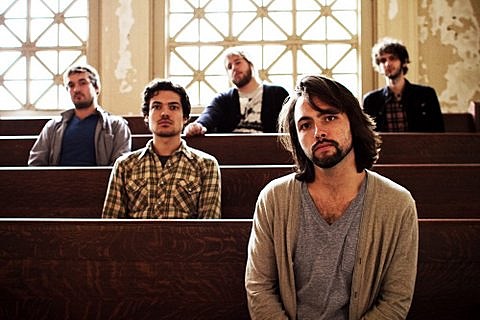 February is a popular month for residencies. Atomspheric and anthemic Brooklynites Snowmine are on Week Two of their Pianos residency. , With Sea of Bees, Via Audio, Beat Radio.

Cameo plays host to Zambri (sorta Siouxsie at her most tribal), plus Sunglasses, Bermuda Bonnie, and Rewards on DJ duty.

If you haven't seen Caged Animals yet (read more here), correct this at Shea Stadium tonight where they play with Night Manager, Island Twins, and Weird Rivers.

Holy mid-'90s! At Littlefield it's Ida, Babe The Blue Ox, The Mommyheads, plus Beekeeper, and Sportsmans Paradise.

Flyers, tour dates, album streams and videos are below.