Veronica Falls at MHOW in February (more by Amanda Hatfield) 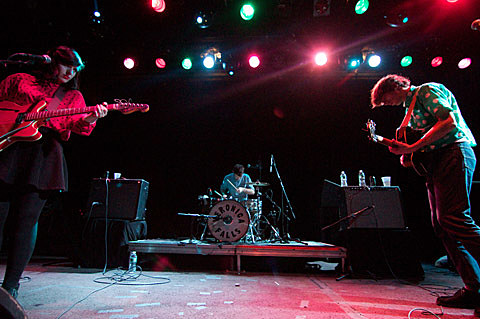 As mentioned, Veronica Falls and Peoples Temple are tonight's attractions at the South Street Seaport as part of the River to River Festival which happens tonight (6/29) at 6PM and is free. Both bands most recent albums made my Favorite albums of 2011 list. Veronica Falls:

"Found Love in a Graveyard" made my Favorite Tracks of 2009 list and have been waiting a full-length ever since. The band does not disappoint. There's not a dud in Veronica Falls' 36 minute running time. New songs are equals to early singles which appear here in newly recorded versions that might actually improve on the originals. This is haunted pop, a brisk October breeze that calls for a nice cardigan.

The UK band won't need a cardigan tonight. The band's new single "My Heart Beats" is the band's sunniest song yet and you can watch the video (co-directed by former Cause Co-Motion-er Alex Curtain) at the bottom of this post. Veronica Falls, who were last here in February, are great live too.

As for Lansing, MI's The People's Temple, their album Sons of Stone is a big heavy slam of tuneful '60s-style psych rock. (You can stream it via Spotify widget below.) The band really knocked me back when I saw them at Death by Audio back in April. If you like Nuggets and early (catchy) BJM, you'll dig The Peoples Temple.

There are bands playing after Veronica Falls at Skippers' tiki bar (behind and to the right of the Seaport Stage) but they haven't announced yet who's playing tonight. It's free. It's also where the second stage at 4Knots Festival is happening.

Next Friday (7/6), the River to River Festival continues at the Seaport with Patrick Watson and Loney Dear. The Veronica Falls video and The Peoples Temple video and album stream are below.