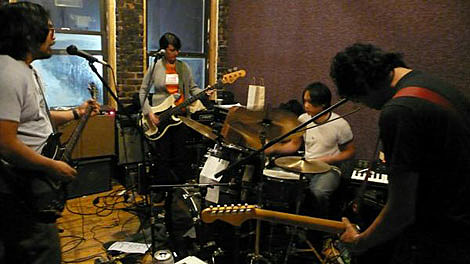 Indie rock nostalgia continues this summer at South Street Seaport. The band Versus have been added to the free show schedule that already includes Polvo and Superchunk (who Versus are opening for on July 17th). Superchunk and Versus are also playing the XX Merge Festival in July. And...

"Versus still continued to tour occasionally but began a recording hiatus in 2001 after it broke up for a short period and Richard Baluyut relocated to San Francisco. The members afterwards moved on to other bands - James Baluyut and Patrick Ramos formed +/-, Fontaine Toups formed The Fontaine Toups and Richard Baluyut converted his solo acoustic project Whysall Lane into a full band. [Wikipedia]

...Plus/Minus are playing Mercury Lounge on June 18th. Versus are opening for them! Mascott and Gramercy Arms, who Mascott also plays with, are both also on the bill. Tickets are on sale.