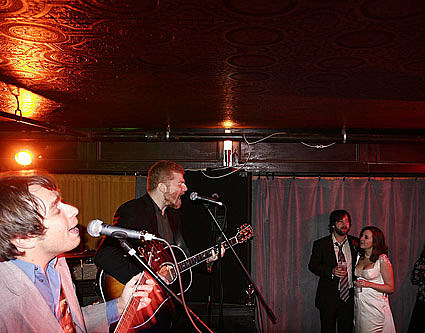 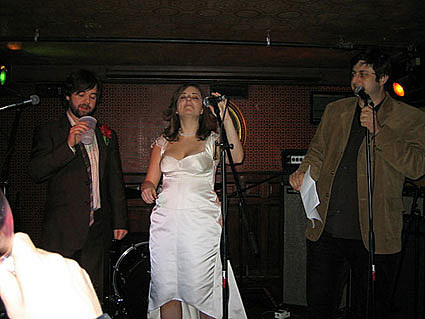 Union Hall can now call itself home to at least two major indie rock weddings, and both weddings involved The New Pornographers' Carl Newman, and Union Hall mainstay comedian Eugene Mirman, in one way or another. The first wedding (August 4, 2007) WAS Carl Newman's, and (luckily then) Carl merely played at the second one. Carl and Peter of Peter Bjorn & John did a set of covers at the private Saturday night show that also included sets by Dean & Britta and The Mugs (not the Muggs). Congratulations to Union Hall's booker Skippy, and his new wife Courtney. More photos like the two in this post, at Flickr. Read an interview with Skippy (Jack McFadden) at Gothamist.

For Peter, that meant his third show at Union Hall. His first was with Bjorn and John - their NYC debut back in January, and his second was just one night before the wedding - he was the not-so-secret guest on Friday night's David Kilgour show....

Peter played a short impromptu set of songs he's working on for an upcoming solo album, working out arrangements in advance of his "real" solo show at Joe's Pub on November 19. Stress on "working them out." There were stops and starts, flubbed lyrics... but luckily Moren's a real charmer so nobody seemed to mind....[Sound Bites]

the real treat was after the night's show (including David Kilgour and Euros Childs) was supposed to be over.

1990s indie faves Versus reunited for their second show since breaking up in 2001. This wasn't the start of a reformation, however -- this was a 40th birthday present for former Teenbeat labelmate Matthew Datesman, who has logged time playing drums for various bands on that influential Arlington, VA label, including True Love Always, Aden, and currently Flin Flon. Teenbeat prez and Flin Flon singer Mark Robinson (who still looks like he's 25) was one of the 50 or in attendence, most of whom were super-psyched to be seeing Versus. [Sound Bites] 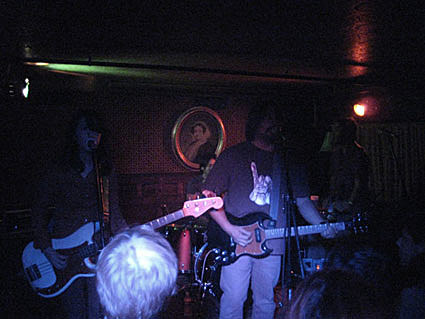 And as if that wasn't enough, Michael Showalter's new comedy album Sandwiches & Cats is out this week. What does that have to do with Union Hall? Well, it was recorded there! Stream it now at AOL.

As you probably know by now - mostly thanks to Michael Showalter & Eugene Mirman's weekly Sunday night show "Tearing the Veil of Maya", Union Hall has become - along with UCB and Rififi, one of the best places to catch a show by one of NYC's many "alt-comedians". Aziz Ansari, David Cross, Jon Benjamin, Leo Allen.....the list goes on..... 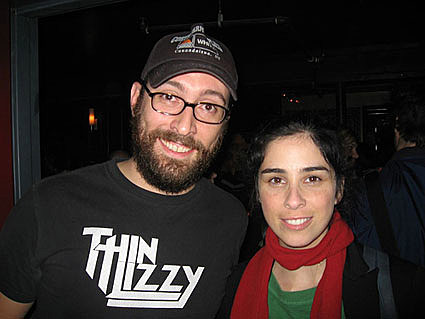 That's right - Sarah Silverman herself was the the "surprise" at Todd Barry's 20th year in comedy celebration at Union Hall earlier this month.