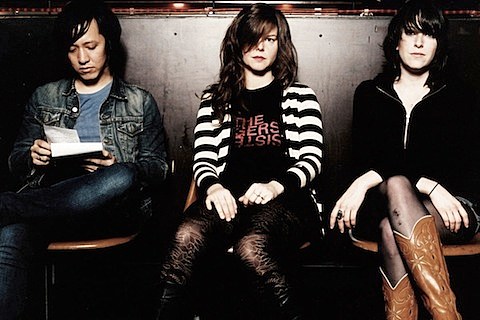 Versus are currently in the studio working on their next album though no word on when that is going to come out. You can however catch them live on November 9 at Rough Trade where they'll play with the Thalia Zedek Band, Antietam, Rogers Sisters, and Cynthia Nelson. The show is a benefit for Letha Rodman Melchior (wife of Dan Melchior and artist in her own right) who has been battling cancer for some time. Tickets go on sale Friday (9/26) at noon.

The Rogers Sisters, regulars in the early-'00s Brooklyn dancepunk scene, disbanded in 2007 but got back together back in January for a benefit for Melchior. (2002's Purely Evil holds up well, listen at Rdio.) Antietam, meanwhile, will also be opening for Yo La Tengo at Town Hall on December 3 (tickets).

Speaking of Thalia Zedek, she also sings on three songs on the upcoming debut album from Exit Verse the new band of Geoff Farina of now defunct '90s/'00s emo/indie rock vets Karate. Along with Geoff, the band includes drummer John Dugan (Chisel, Edsel) and bassist Pete Croke (Brokeback, Tight Phantoms). Their album's self-titled, due November 17 via Ernest Jenning Record Co., and the first single "Seeds" is out now. Check it out below.

A Rogers Sisters video also below...