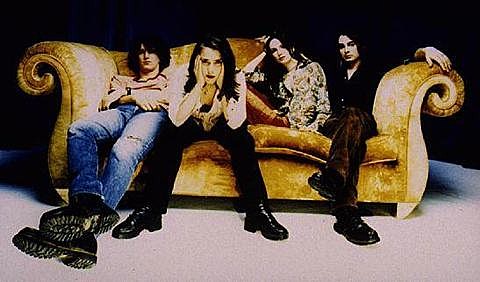 Chicago indie rock band Veruca Salt caused quite a sensation with their 1994 debut single "Seether" and subsequent full-length, American Thighs. The band suffered from an overproduced second album and co-frontperson Nina Gordon left the band shortly after. Louise Post carried on with Veruca Salt (with varying backing members) up through most of the '00s, releasing IV in 2006.

After calling it quits, the original line-up (Gordon, Post, Jim Shapiro, and Steve Lack) announced in March of this year via Facebook that they were reforming -- "for now let's just say this: hatchets buried, axes exhumed" -- and working on new material. The band are currently recording a new album with Brad Wood, who produced American Thighs (and Liz Phair's Exile in Guyville, among other '90s indie rock LPs).

Louise and Nina's first live, public performance together in 15 years will happen in Los Angeles on December 18 as part of Second City's 2013 24-Hour Improv & Music Benefit. Their performance happens at 10 AM CST (11 AM EST) and, like the rest of the benefit, will be broadcast live online.

The event, while Chicago-based, has performances happening from all over the country from December 17 at 6 PM CST to December 17 at 6 PM CST, including St. Vincent performing at 6:30 PM CST from somewhere in Brooklyn. Other performers playing the benefit include Bob Mould, Jeff Tweedy (who also plays a related benefit in Chicago in January), Fred Armisen and more. The full schedule for the Second City's 2013 24-Hour Improv & Music Benefit is listed, along with a few classic Veruca Salt clips, below...