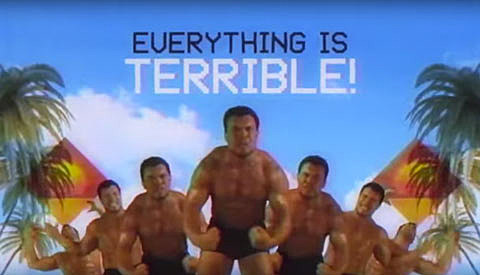 In this YouTube age, there are no shortage of weird/wrong VHS-era videos floating around, but few have the curatorial taste and demented affinity for the stuff like the folks at Everything is Terrible!. What makes them a few cuts above isn't just finding this crap, but also editing and juxtaposing it into something that takes on a funny, surreal and occasionally nightmarish quality. Everything is Terrible! have have a new traveling show, titled "Legends," which will be touring this fall. More:

Once a millenium, something emerges from the darkest corner of the universe and enlightens us to the true meaning of being. Something so mystickal, so magickal, and so mind-splitting that all concepts before its existence sounds stupid and boring. Of course, we are talking about Everything Is Terrible! The Legends show is a culmination of the first seven (of 777) years of work from the video alchemists at EIT! These mindfreaks have taken thousands of forgotten VHS tapes, chewed them up, and spit them back to their young via daily website postings, six movies, and world tours. In that time, they've exposed us to wonders such as massaging cat ladies, apocalyptic facial exercises, pizzas parties in hell, and our immortal party-god, Duane. Nobody could have predicted the cultural, psychological, and illuminating impact EIT! would have on our consciousness, but seeing all their greatest works chronicled in one place reminds us that in the right hands, garbage can be turned into gold! It is time pack up your copies of Jerry Maguire and accept the fact that your life up until this moment has been pointless.

You can check out a few videos to give you a taste. The tour hits NYC on November 1 at The Bell House and tickets are on sale now.