"yeah, i can tell you what i know, but no one knows much: another suicide attempt, looks bad, coma--if he survives, there may be brain damage" - Kristin Hersh

DOWNLOAD: Vic Chesnutt - Flirted With You All My Life (MP3) 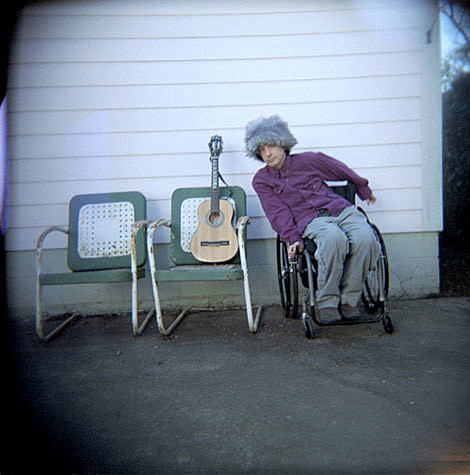 Vic Chesnutt, a singer-songwriter from Athens, Ga., beloved by fans and critics for his disarmingly open songs about mortality and pain, is in a coma, his family has confirmed. They did not say what caused the coma.

News about Mr. Chesnutt's condition spread through the Internet on Wednesday through posts on Twitter by the singer Kristin Hersh, who has played with him.

Mr. Chesnutt, 45, has been in a wheelchair since a car accident when he was 18, and was discovered in the late 1980s by Michael Stipe of R.E.M., who produced his first two albums. [NY Times]

Vic spent much of October, November and December touring behind his new album At the Cut. His band consisted of Fugazi's Guy Picciotto and members of Godspeed You! Black Emperor and Silver Mt. Zion. Some recent live footage below...

Vic Chesnutt - everything I say

Vic Chesnutt - Flirted With You All My Life

Vic Chesnutt - Everything I Say