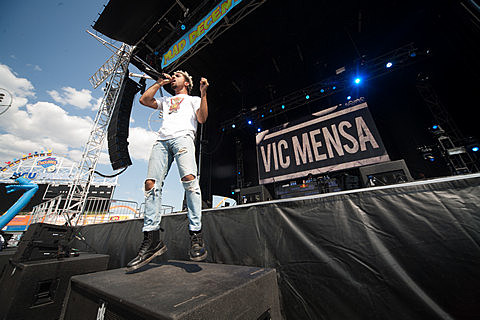 We recently posted Vic Mensa dates, which included a few of the Mad Decent Block Parties, like the Coney Island one he played this past weekend. He's since added more shows to his schedule, including a return to NYC to open for Iggy Azalea on Pier 97 on September 26. Tickets for that show go on sale Friday (8/15) at 10 AM. They're on Citi/Live Nation presales now, and a Radio presale starts Thursday (8/14) at 10 AM. Updated Vic Mensa dates, including the LA stop of Fool's Gold Day Off, are listed below.

In related news, Vic's go-to producer Michael Uzowuru has posted a 5-song EP of mostly instrumentals (but including a verse from Vic) called Pink Orchids. You can stream that, with the list of Vic's dates, below...