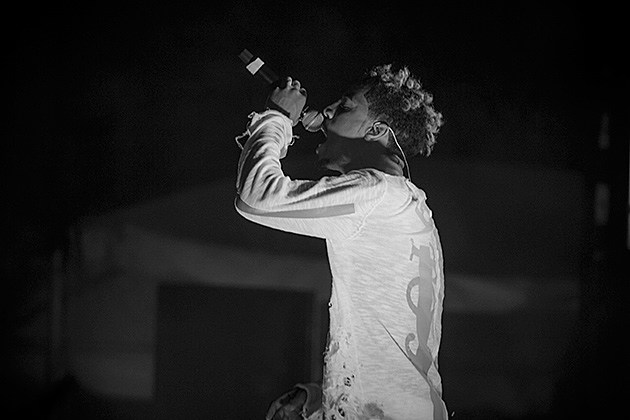 Vic Mensa's rise has been quite the interesting one. It's almost hard to remember how closely tied to Chance the Rapper he was only two years ago, considering both have gone in wildly different directions. He put out a couple impressive singles last year -- the danceable "Down On My Luck" and the Kaytranada collaboration "Wimme Nah" -- and so far this year he's released two even better ones. There's the Kanye West-featuring "U Mad" that came out back in the spring (following Vic's appearance on Kanye's "Wolves" single) and the more recent Skrillex collaboration, "No Chill." Say what you will about Skrillex's own music, but he's undeniably great when he produces for rappers (like "Wild for the Night" with A$AP Rocky, who Vic opened for in NYC last month).

Vic also recently released a freestyle called "Heir to the Throne" which disses fellow Kanye collaborator Travi$ Scott and pays tribute to Jay Z, whose Roc Nation imprint will release Vic's debut album. It's titled Traffic and is due out at some point this year. Vic also recently released a cover of Future's "Codeine Crazy," which like the aforementioned tracks, is streaming below.

Two weekends ago, Vic played hometown festival Pitchfork Festival, and on Friday (7/31) he made a surprise appearance at another hometown festival, Lollapalooza. He jumped down about 15 feet from the DJ booth to the stage during Dillon Francis' set and proceeded to dance on stage. It's pretty amazing considering that jump looks like it hurt. Watch below, and stay tuned for a Dillon Francis remix of "U Mad." The next day at Lollapalooza, Travi$ Scott was arrested during his set.

Vic has more dates coming up, including the first of two Mad Decent Block Parties in Brooklyn (8/8) (sold out), Philly's Made In America festival, and the big Asbury Park (9/19) show with How to Dress Well, The Front Bottoms and more (tickets).

All dates are listed, with videos and song streams, below...