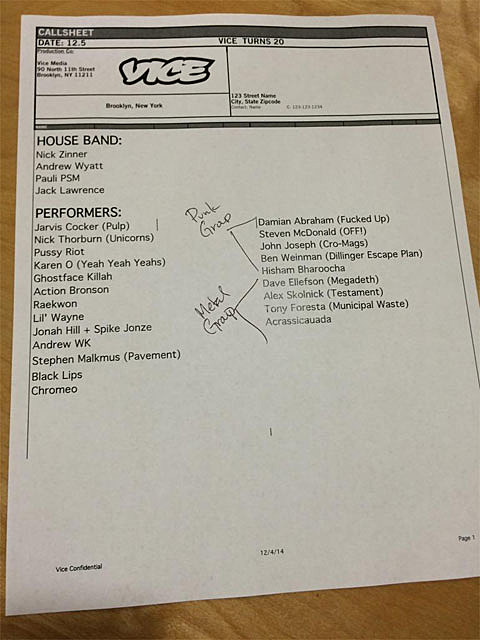 Earlier this week we started to hear rumblings of a super secret, giant Vice party taking place Friday night (tonight, 12/5) somewhere in Brooklyn. Many big names were rumored to be playing. Like the event they just threw in Toronto, it would be to celebrate the now-mega-company's 20 years of existence. Then last night Nick Zinner tweeted the above "Vice Confidential" memo which has the Yeah Yeahs guitarist playing as part of a house band which will be fronted by Karen O and a ton of other exciting guests, if it all comes true. Pussy Riot is even on there, as are a bunch of Vice Records artists, as you can see above.

The show is invite only, but apparently they'll at least be filming it all (for the benefit of those not in attendance, and for those who make it in but partake a bit too much in the open bar), and they gave away a few tickets.

It goes without saying that the timing of this, though surely coincidental, is just a bit unfortunate for everyone since the last time we used "Brooklyn", "Vice" and "party" in the same sentence, was to discuss the final night of Death By Audio less than two weeks ago (Glasslands closes on New Year's Eve).

For what it's worth, I don't think there's any crossover between the Vice lineup and who played the final month at DbA, though Hisham Bharoocha used to be in Lightning Bolt who played DbA's final night.