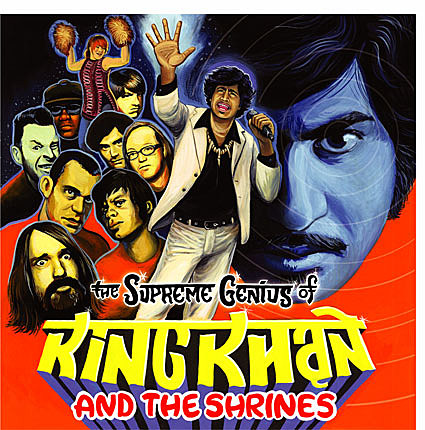 VICE Records is proud to announce the signing of the 12-piece psychedelic soul big band explosion King Khan and The Shrines, and the release of The Supreme Genius of King Khan and The Shrines on June 17. Nothing will get you ready for sunburn season quicker than a blast of this garage soul inferno, equal parts Lenny Kaye-era Nuggets, James Brown soul revue and Sun Ra freak session. Sexual voodoo, secret societies and hallucinogenic transcendence all conspire over rampant garage-psych riffs and Muscle Shoals horns with the blue-eyed tear drops and desperate wail of King Khan testifying like a true motherfucker.

Originally sighted in Montreal's Spaceshits, and sometimes appearing as the semi-naked half of the King Khan & BBQ Show, King Khan moved to Berlin in 1999 where he and the Shrines have been spreading their love like peanut butter through a flurry of full-lengths, EPs, singles, and hard-to-find vinyl releases. Their first album THREE HAIRS & YOU'RE MINE was produced by Liam Watson at the legendary Toe Rag Studios in London and released in 2002. A second full-length, MR. SUPERNATURAL, followed in 2004. Their third full-length WHAT IS?! received critical acclaim all over the world and landed at #33 in Pitchfork's Top 50 Albums of 2007. In between have been French-only releases, a split with the Dirtbombs, 7"s, 10"s, and more. The Supreme Genius of King Khan and The Shrines collects the cream of this very creamy crop and present the greatest hits of his greatest hits, all available for the first time ever in America.

Look for the first-ever King Khan and The Shrines US tour this July and August. Dates to come.