Victims at Lit Lounge in 2009 (more by Paul Birman) 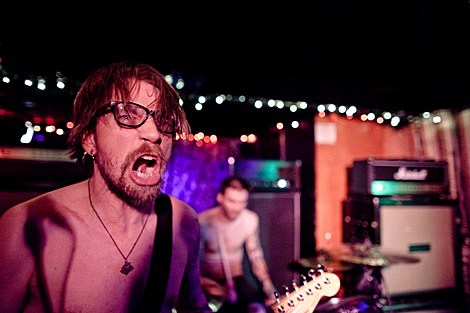 In May 2009, the killer triple bill of Victims, Trap Them, and Black Breath hit two NYC heavy music staples, The Charleston and Lit Lounge. As you can see in our pictures of the cramped Precious Metal show, that bill also included Black Anvil!. The show was one of Victims' last U.S. dates, but the Swedish band has announced that they will return this summer to make an appearance at Best Friends Day in Virginia with Converge, pg.99, Iron Lung, COC, and a slew of other notables. Rumors of a U.S. tour are circulating but if you want to be sure to catch them, head down to the already stellar Best Friends Day. Just be prepared to get hurt.

In 2009 Victims were touring off of their Killer LP (in name and adjective). Now they have a new LP now called A Dissident which is due April 12th in digital/CD form via Deathwish, and vinyl form via Tankcrimes. With A Dissident, the d-beaters have returned with another crusty thirteen (how appropo) track bludgeoner, which is streamable in its entirety below!